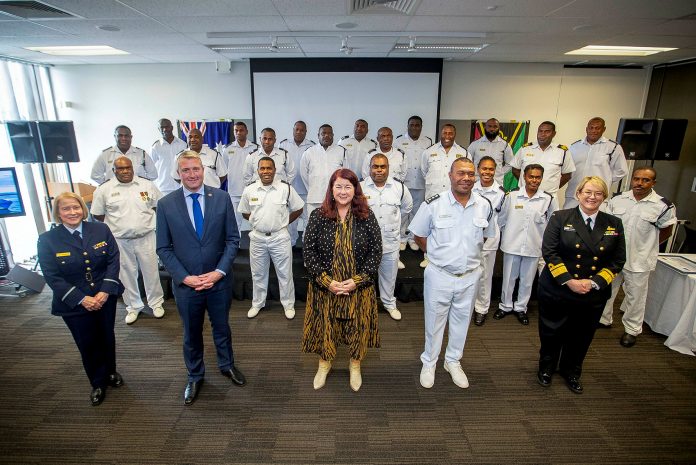 Vanuatu has taken ownership of its new Guardian-class Patrol Boat.

The RVS Takuare is the 12th vessel delivered under the Australian Government’s Pacific Maritime Security Programme and was handed over by Australia on Vanuatu’s Independence Day at a ceremony in Henderson, Western Australia.

Samson Fare, Vanuatu’s High Commissioner to Australia, accepted RVS Takuare on behalf of the Republic of Vanuatu alongside senior ADF representatives via live stream from Canberra.

The vessel is the first Guardian-class Patrol Boat to be delivered to Vanuatu under the Pacific Patrol Boat Replacement Project (SEA3036-1), part of the Australian Government’s Pacific Maritime Security Programme; and replaces the RVS Tukoro, a Pacific-class Patrol Boat delivered in 1987.

Minister for Defence Industry Melissa Price represented Australia at the handover and said Vanuatu’s new Guardian-class Patrol Boat was an important demonstration of the enduring strength of the Vanuatu-Australia security relationship.

“I wish to congratulate Vanuatu on its 41st Anniversary of Independence and extend my best wishes to the people of Vanuatu and to the ni-Vanuatu community here in Australia,” Minister Price said. “It is fitting that Australia is delivering RVS Takuare today.

“Australia is proud to deliver this high quality vessel, supported by wharf infrastructure upgrades in Port Vila and through-life training and maintenance – a hallmark of our Pacific Maritime Security Programme.”

“This is an emphatic demonstration of caring at the highest level, expressed in no better way than on Freedom Day for our Republic by this generous gesture of giving by the people of Australia, and represents a new call on nationhood in our expression of security and maritime surveillance,” Vanuatu’s Deputy Prime Minister Alatoi Ishmael Kalsakau Maau’Koro said. “To say that we are proud understates the value we give to this relationship.”

No jab, no job – Fiji Government policy enforced through law