Fiji’s back to back gold medal win in sevens rugby at the Tokyo Olympics Wednesday will open up doors for young people in Fiji and the Pacific to get scholarships to study and play in Asia.

The Fijian sevens gladiators denied New Zealand a chance to win he coveted gold medal, 27-12 match point that was played to a crowd of hundreds of officials, players and media from the countries through to the final rounds. Fiji scored four tries with two conversions and a penalty to NZ’s two tries and a conversion.

Only the captain, Jerry Tuwai was in both their Olympic campaigns, with the rest of the squad featuring new faces, seven of whom had not previously been to a Series. The team were very emotional after more than 18 months without seeing their families and friends in person.

Fiji’s Ambassador to Japan, Isikeli Mataitoga told PACNEWS in Tokyo that rugby is now a big wage earner for players who are contracted in Japan.

“We want this game to grow internationally. Because for us it’s a great opportunity for our young people to come forward and earn money for their families overseas. Half of these young man playing won’t be here next year because they will get contracts to play overseas. When they come to Japan for a contract in the top leagues teams, they pay them FJD$22,000 a week and that’s a lot of money back home.

He said rugby is a sport that transcends political, social, economic divide in Fiji. 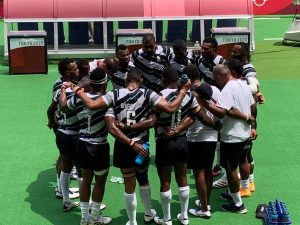 “As a diplomat, sport is now one of the biggest pillars of our outreach in the Asian region. In the renewed Asian policy, sports particularly rugby is going to be one of the major ones we are targeting. In the last four years we have seen an increase in high school students coming to Japan on scholarship for this precise reason, said Mataitoga.

He’s met recently with representatives from Korea and other organisations that want to offer sports scholarship for students to come from Fiji.

“This is unprecedented for Fiji – and it clearly opens doors of opportunities for us. It’s like when I was in Europe, everywhere I go, everyone would recognise Fiji as a country of peacekeepers. But in this part of the world its sevens rugby that now opens the doors.

In my discussion with the President of the Japan Rugby Union, Shigetaka Mori, he told me that they were first of all coming to join Oceania because they see there’s standard there. I told him to encourage high school students because that’s where you really need to build your strength – and the pathway to contracts for them.

“So the sevens rugby win, opens the doors for these kinds of developments, said Ambassador Mataitoga.

He said the win was a breath of life and celebrations for the people of Fiji who have in the past six months suffered from growing number of COVID19 cases and a rising death toll.

“This win will lift their spirits and take away all these sufferings in Fiji from COVID19 and unite the people to come forward with renewed hope.

The Fijian diplomat maintains sevens rugby is a unifying force in Fiji.

“It’s our second gold medal in our entire history and since it was introduced as an Olympics sport. It’s the only game play and we know we will win, that’s how confident we are in sevens rugby, Ambassador Mataitoga told PACNEWS in Tokyo.