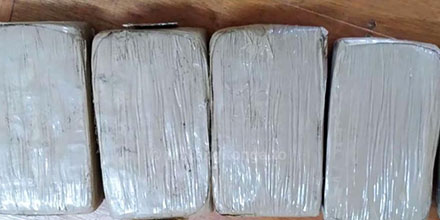 Cocaine packages with a street value of around $2.3 million pa’anga(US$1 million) have washed up on beaches at Höleva and Ha’alaufuli in Vava’u, triggering a major search for further drugs by Tonga Police and HMAF navy today.

Vava’uans are being urged to hand over to police any further packages that may wash up in the northern island group of Tonga.

He said that Police, who were still investigating exactly when the first packages were found, were working closely with the Tongan navy, utilising the patrol boat VOEA Ngahau Koula to scour areas of interest in the Vava‘u waters.

“There is possibility that more packages may turn up on the beach and we ask any members of the public to immediately contact Police if they found or knew anyone to have found further drugs,” said Acting deputy Commissioner Taufa.

Tonga Police photos show at least five bricks of cocaine, with another black rubber bag containing a quantity of white powder wrapped in plastic. Taufa said that the weight of the haul was still being measured by police.

“The packages look similar to those that were found in Vava’u before,” he said, referring to the wreck of the JeReVe in 2012.

Taufa strongly reminded that “anyone who has in their possession any of the washed-up drugs and failing to hand over to Police is a serious offence.