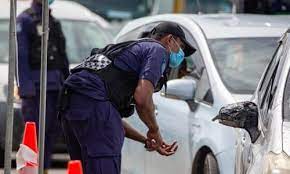 Nine prominent opposition politicians – including two former prime ministers – have been arrested in Fiji for voicing concerns about a contentious land bill, leading to fears the Fijian government is using the police as a “political weapon” to intimidate and crack down on dissent.

Six members of parliament and three other high-profile politicians were taken into custody by the criminal investigations department on Sunday and Monday in relation to comments they had made regarding proposed amendments to a land bill, which is expected to be debated in parliament this week.

Eight were arrested on Sunday, while Chaudhry was taken in on Monday.

Prasad said arrests of opposition MPs were a common occurrence under the prime minister, Frank Bainimarama.

“Now the police are being used as a political weapon by the FijiFirst party to intimidate opposition,” he said. “But we will not be intimidated by their thuggish behaviour.”

However, Bainimarama said in parliament the political figures were “super-spreaders of lies” who were using an administrative amendment to a land bill to mislead and incite indigenous people.

The government has introduced a bill to amend legislation concerning the governing of native land, an amendment the opposition have said will remove power from landowners. The government maintains the changes are administrative and for the purpose of removing bureaucracy.

Acting Commissioner of police, Rusiate Tudravu, confirmed in a statement on Monday that the opposition members were questioned and released under the Public Order Act.

But investigations are continuing and more people are expected to be taken into custody for expressing their concerns regarding the iTaukei land trust (budget amendment) bill.

“Not for the purpose of intimidation as claimed by some,” said Tudravu, “but as a proactive means to find the truth and not everyone who is brought in for questioning will be charged.”

There were also concerns that local journalists were also rounded up and detained. Tudravu said those claims were untrue.

A local journalist who has spoken to the Guardian said he was concerned that “journalists too will end up being questioned by the police for writing stories about the amendments to the land bill”.

There are fears that tensions over the bill could lead to political protests and civil disobedience. Police have increased their presence in major towns and cities across Fiji, and the acting commissioner has warned they “will come down hard on any person or group that tries to cause instability and civil unrest”.

Gavoka, who was one of those arrested on Sunday, implored people to remain peaceful. “The party is pleading that any scheme to cause disruption or instability throughout the country must cease immediately,” he said in a statement.

“It will bring us nothing but more suffering in an already dire situation due to Covid-19 and the failure of the government of the day in handling this pandemic. We do not want repetitions of past political turmoil; we have had enough of that.”

The political tensions come as Fiji struggles to control a Covid outbreak across its main island, Viti Levu.

More than 270 people have died in Covid-related deaths since the second wave began in April and almost 17,000 active cases are in isolation. Health authorities have warned infections and deaths will continue to rise.

Prasad said the government was using the arrests as a distraction in dealing with the Covid situation. “At a time when people are dying, not able to put food on the table or get medical care, this government arrests opposition leaders for doing their job,” he said.