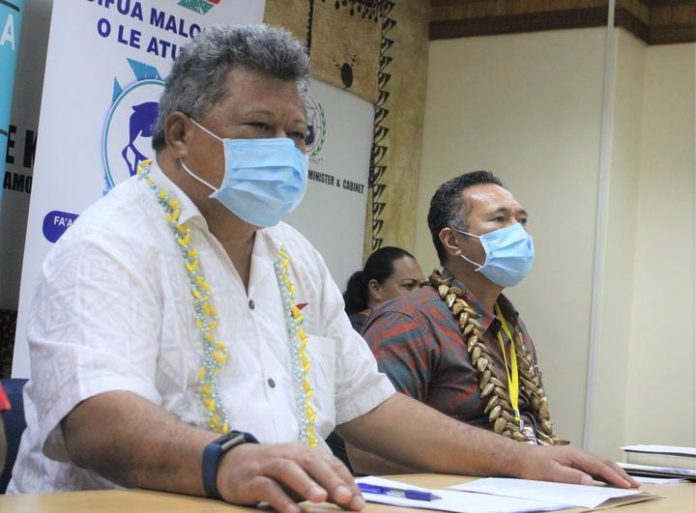 Samoa is pushing its vaccination roll out to cover 99% of the population as the vicinity to Fiji poses a high Covid 19 risk as active cases rise to 1000 per day and 96 deaths so far.

The Director General of Health, Leausa Dr Take Naseri told a press conference this week that the situation in Fiji is of concern to not only to the members of the National Emergency Operations Centre (NEOC), but to the country as a whole.

“I believe after Fiji, Samoa will be next and I hope by such time Samoa’s population would have gone through all the vaccination process,” said Leausa.

It is hoped that 99% of Samoa’s population will be vaccinated and compared to other countries who have had their complete vaccination doses, when the virus gets in the country, its impact will have less people dying from it.

Despite borders being closed, Samoa is still vulnerable especially with container ships travelling from Fiji to Samoa and also people traveling on repatriation flights.

Strict measures have also been taken for all travellers to Samoa to ensure they take both COVID-19 doses before they are allowed to enter the country.

When the vaccine was first introduced back in April the United Nations Resident Coordinator Simona Marinescyu and health officials said children under 18 will not be vaccinated.

The reason given was that they had very low risk of the virus.

However, Leausa said with the quantity of vaccines received in the past weeks, they have reviewed and decided that there was enough to include 12 to 18 years old in the vaccination campaign.

“Samoa has registered with any vaccine endorsed by the World Health Organisation (WHO) and we have asked for the Pfizer vaccine for our young youths and children,” said Leausa.

The committee is also looking and reviewing the chances of vaccinating pregnant women 3 months prior to giving birth and after breastfeeding her baby for 6 months.

“No decision has been made yet but based on safe reports from other countries they are looking at it,” he said.

With enough supplies of vaccines recently donated by Australia and Japan, Samoa is able to continue her vaccination roll out campaign.

Leausa said there was concern early this month when they realized that the vaccines were running out, but the assistance from these countries have helped continue their service.

Additional teams have been dispatched to assist the teams at the district hospitals and the Village Women’s Committees.

Leausa is urging all those who have taken their first dose of the vaccine to utilize the hospital or fixed sites at Apia for their second dose.

“There are reports of people reacting to the second dose so to be safer, it is best to either go to the hospital or fixed sites for your second dose,” he said.

The next repatriation flight from New Zealand is on the 27 July with follow up flights in August and September.

The cargo flights which used to arrive on Fridays are now rescheduled for Thursdays while repatriation flights are moved forward to every Tuesday.

Leausa said only the Manu Samoa team are currently in quarantine and are also following the standard process of required tests.