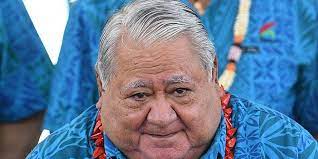 Mata’afa says the Human Rights Protection Party’s (HRPP) efforts to cling onto power whilst the nation is under a State of Emergency is deeply concerning, noting that they have already used “unconstitutional proclamations” by the Head of State to retain power and continue to rule the country.

“Under the Constitution, the judiciary is the only legal body and the authority and power to interpret and render final pronouncements on the Constitution and the law in Samoa,” she wrote in an official statement.

“Tuilaepa and HRPP supporters and their advisers in their media releases, have stated that the Head of State is above the law and possesses powers to direct everything and everyone, including the Police, in a manner which is not authorised by the Constitution and the only protection which you and I have is through our country’s Courts.

“On 09 April, our people expressed their will through their votes.

“It is going on to four months now and Tuilaepa and the caretaker government and HRPP in their behaviour, continue to disregard the will of the people expressed through the general elections.

“They have instead blamed FAST and the Judiciary for their loss.”

She proclaimed their continuing support for the Judiciary and noted that it has become clear that the intention and design of the three controversial bills passed last year was to weaken the role of Judiciary and the Chief Justice.

Under the new pieces of legislation, the Judiciary is split in two, with a Land and Titles High Court with equal footing to the Supreme Court. It also granted a Government-appointed Judiciary Service Commission to appoint and remove Supreme Court Judges.

(While it lacks the power to sack judges, the commission can recommend they be suspended when Parliament is not sitting; a decision that then must be approved by the Head of State).

“Parliament has been prevented from sitting, and the Judiciary is the remaining and standing pillar left of our democracy that holds our last hope to defend our democracy” her statement continues.

“Tuilaepa and the caretaker government is now moving to take full control of the Judiciary using unfounded claims so they can suspend the Chief Justice and give notice to the judiciary.

“These are the red flags and warning signs taken from a Tyrants playbook, as he attempts to move us to a dictatorship and the absolute rule by one.”

Mata’afa then urged the public to remain calm as they continue to work through the national political impasse.

“As the country continues under the pandemic State of Emergency, it is my earnest and constant prayer that we all remain calm so as not to provide an excuse for the further abuse of Emergency Orders and unnecessary restrictions on trade and personal liberties by the caretaker government.

“But for us all to continue to protect, defend and uphold the rule of law and the democratic principles that have steered our nation well over the last 59 years as an independent country, and await the final decisions in matters which will define us for the next five years.”

Mata’afa has written to the Judicial Service Commission, condemning a complaint questioning the competency of the Chief Justice, Satiu Simativa Perese, as an unfair vilification of the judiciary.

The HRPP secretary, and Member-elect, Lealailepule Rimoni Aiafi wrote to the commission last week calling for an “urgent” investigation into an alleged lack of competency by Justice Satiu. He also used some of the election petition cases in recent weeks, where the Courts ruled against the incumbent party’s Members-elect as examples of the top judge’s lack of knowledge of fa’asamoa and Samoan voter behaviour.

In response, Mata’afa wrote to the commission’s Secretary and the Ministry of Justice and Courts Administration Chief Executive Officer, Moliei Simi Vaai saying letter of complaint from the HRPP lacked factual grounding and was filed at a time when the court was preparing to preside over critical matters of constitutional law.

Mata’afa’s 13 July 2021 letter says that the HRPP complaint struck at the “very heart” of the conventions underpinning Samoa’s democracy.

Meanwhile, the outspoken Member of Parliament for Salega No. 2 has criticised an extraordinary move against the judiciary by the Human Rights Protection Party, questioning the competency of the Chief Justice and other judges not only as “disrespectful” and an “insult.”

Speaking to the Samoa Observer, Olo Fiti Va’ai said the HRPP had gone too far with their move.

“There is a line or boundary that keeps us from stepping onto another person’s line of work,” Olo said.

“We should not cross that line. We all have different callings from God and we are placed where He thinks we’re meant to be.

“The move to try and remove the Chief Justice because of the decisions from the Supreme Court is not only rude but also disrespectful.

“It is not our job to question the competency of the Chief Justice.

“Why would they question the Chief Justice and the duties of [our]?

“There is no doubt that the Chief Justice was chosen based on his merits, qualifications, and experience.

“[So] for them to question that, is an insult. They should be very careful and be mindful of the accusations, allegations, and the things they say.”

Olo is of the belief that a “politician without a legal background should never question the work of Judges in Samoa.”

In saying that, Olo said there is a way to do things if one is unhappy with the decisions from the courts.

“As I said before, there is a line that we must not cross. We, politicians, should stay in our own lane. We take issues to court so we can find answers and solutions.

“And if they deliver a verdict and you feel like it’s not the right decision, appeal the case. But it’s not our job to question the competency of our judges and chief justice.”

Furthermore, Olo believes that the HRPP would not have resorted to such actions had they have been successful in their legal cases.

“Time and time again, they have come up with things to drag this whole process and the transition for a new government. This is part of their tactics to drag that transition.

“But we shall wait and see what will come out of it,” he said.

NZ is the latest to join foreign intervention mission to Solomon...