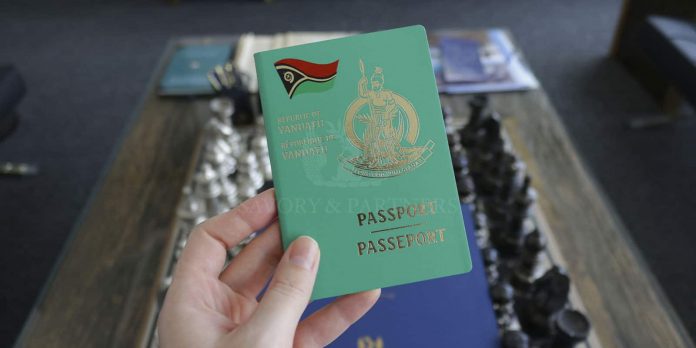 A former Comanchero bikie and a missing property magnate owing hundreds of millions of dollars after his businesses collapsed are among Australians granted citizenship through Vanuatu’s controversial citizenship-by-investment scheme.

Marco Francis Coffen and Zhou Xiang Huang, both from Australia, appear on a list of people who purchased citizenship from Vanuatu for US$130,000 last year.

A Vanuatu passport allows visa-free travel through 130 countries, including the EU and UK, and Vanuatu also operates as a tax haven, with no income, corporate or wealth tax. The application process typically takes just over a month and can be conducted without ever setting foot in the country.

While the scheme has provided important revenue for Vanuatu, one of the poorest countries in the world, experts have warned it is vulnerable to exploitation, creating a back door for access to the EU and UK and allowing transnational criminal syndicates to establish a base in the Pacific.

A series of documents obtained by the Guardian through freedom of information laws lays out the name and nationality of every recipient of a Vanuatu passport through the country’s Development Support Programme (DSP) and Vanuatu Contribution Program (VCP) in 2020 and January 2021.

Vanuatu issued nearly 2,200 passports through these programs in 2020. There is no suggestion that any of the named individuals were motivated to apply for Vanuatu citizenship by any improper purpose.

Six Australians were listed, including Coffen, a former member of the Comancheros, who is reportedly being sought by police for questioning in relation to a 2010 murder (there is no suggestion he was involved in the murder).

Coffen, who now lives in the United Arab Emirates with his wife and four children, describes himself on his website as an “all-around investor, tech strategist, and real estate developer based in Dubai” who grew up in the eastern suburbs of Sydney and says he was “greatly influenced” by his carpenter father and healthcare administrator mother.

Before Coffen left Australia, he was a senior member of the Sydney Comanchero motorcycle club. According to court documents, in 2006 Coffen pleaded guilty to a charge of accessory before the fact to armed robbery, after he was tried in the district court in Sydney.

The charge related to a robbery at gunpoint of around 3,810 Samsung mobile phones from the warehouse of CTI Logistics in the Sydney suburb of Alexandria in November 2002.

Coffen is also reportedly being sought by police for questioning in relation to the shooting death of Gary Allibon, the driver and guard of a Chubb security vehicle who was killed in 2010 during a hold-up.

At his inquest, the coroner said: “Allibon was a decent, hard working man simply going about his job. He was the victim of a cowardly act by an offender who shot him from the rear.”

He noted that police had given evidence that “the investigation has proceeded as far as it can in the current circumstances.”

According to reports there is no warrant out for Coffen and there is no suggestion by Guardian Australia that Coffen was in any way involved in the murder.

A spokesperson for NSW police said in a statement: “As part of ongoing investigations, strike force detectives would like to speak to a number of people in Australia and overseas they believe may be able to assist them with their inquiries.”

Coffen’s name was listed in internal documents from the Vanuatu government as having received a passport in September 2020.

Vanuatu requires applicants to the scheme to undertake a police clearance check, proving they have no criminal record.

When asked how Coffen passed this check to be granted citizenship, Floyd Mera, the director of Vanuatu’s Financial Intelligence Unit, which undertakes the due diligence checks on applicants, said: “Our checks on Marco Francis Coffen, as per his passport, did not have any adverse [findings] for this name. There is information against a Marco Coffen, who in June 2021 is alleged to be a member of the Aussie Cartel (a narcotics syndicate and associate of Comanchero Motorcycle Club Australia) – a purported outlaw motorcycle gang.”

According to the Australian electoral roll, there is no one registered to vote in Australia named Marco Coffen. One Marco Francis Coffen, whose nationality is listed as Australian and whose country of residence is listed as the United Arab Emirates, registered a company in the UK in February of this year.

Coffen did not respond to attempts to contact him.

Zhou Xiang Huang is also named in the list as having purchased a Vanuatu passport.

Huang was an executive in the iProsperity group of companies. He reportedly fled the country last year after the collapse of his businesses, and has left debts estimated to add up to as much as AUD$350m (US$261 million).

According to the Australian Financial Review, Huang fled Australia in July 2020, despite the pandemic, after being granted a travel exemption by the Department of Home Affairs. This came mere weeks after the iProsperity group collapsed.

Huang was a director of 64 of the companies in the group, according to an administrators’ report to creditors. The report found that Huang and iProsperity founder Michael Gu misappropriated investor funds to pay other investors.

Administrators identified a line item in one of the accounts under investigation for more than $1m(US$747,000) paid under four separate transactions with reference to “Vanuatu Passports”. The Guardian did not find Gu’s name in the internal government documents showing successful applicants to the Vanuatu passport scheme.

The Vanuatu citizenship by investment scheme allows people to apply in family groups. A man named Zhou Xiang Huang, with Australian citizenship, was granted citizenship in May 2020 along with a person, also Australian, named Fanhua Bo, and a third applicant, whom the Guardian is choosing not to name.

There is only one-person name Zhou Xiang Huang registered on the Australian electoral roll.