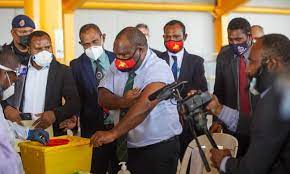 Three months since Papua New Guinea launched its Covid vaccine rollout, just 60,000 people – or 0.6% of the population – have received their first dose, with many people hesitant due to misinformation and fears around the vaccine.

Despite a recent surge in cases that has overwhelmed the already rickety health system, just over 2,800 people have received their second dose.

Recent monitoring of Covid-19 awareness programmes by Caritas Australia found that the overwhelming majority of communities in rural areas still have extremely limited knowledge about the disease and how to prevent its spread.

Diane Unagi, Caritas Australia’s country representative in PNG, said that the bulk of the population were getting their information by word of mouth, rather than on social media or from watching and reading the news.

“When messages are not communicated properly it increases the public health risk,” she said.

“People are avoiding being tested because they are worried that they will be locked up when they hear the word isolation,” she added.

Other common misconceptions include the belief that Covid-19 only affects people living in cities and towns, and not people in rural areas.

As of 09 July, the country had counted a total of 17,340 Covid-19 cases with 179 known deaths although experts believe the figures are likely to be far higher. To date there have only been just over 136,000 Covid tests conducted over the entire course of the pandemic.

Many Papua New Guineans believe they are “genetically immune” to Covid-19. Others, like 61-year-old Harai, a retired accountant who lives in the capital, Port Moresby, say they are not afraid of the virus.

“Its just like flu, when I get flu symptoms which is similar to Covid-19, I just steam myself with herbal leaves and get better,” he said.

Harai also said that he and his wife, have chosen not to be vaccinated as they are not sick. “Why should we get vaccinated when we have not been diagnosed with Covid-19?” he asked.

Though they make up the majority of those who have so far received their first dose, even health workers and essential staff are suspicious of the vaccine. Over 44% are still unvaccinated.

A 48-year-old nurse at a private clinic in Port Moresby, who did not want to be named, said that she and her family would wait to be vaccinated.

“I’ve been in the sector for nearly 20 years, but with all these talks I am afraid of being vaccinated. We will wait for six months to see if there are any side effects before we go in for vaccination,” she said.

As fears grow over the new and extremely contagious Delta variant, which has been found in almost 100 countries, including neighbouring Indonesia, PNG authorities have implemented new measures, including the closure of international borders. Only those who have been vaccinated are now allowed to enter the country.

Paul Barker, executive director of the Institute of National Affairs, said the restrictions on international flights were wise, but that measures also needed to apply to the border with West Papua.

“Clearly, increasing vaccination rates fast, to be able to significantly reduce transmission rates would be good, but that will take a long time, especially with high hesitancy rates,” he added.

Port Moresby General Hospital CEO Dr Paki Molumi who received his second dose of the AstraZeneca vaccine on Tuesday this week says the only way to reduce transmission of COVID-19 and protect the country’s fragile health system is to get as many people vaccinated as possible.

He called on the public to come foward and get vaccinated to protect themselves, their families and their communities.