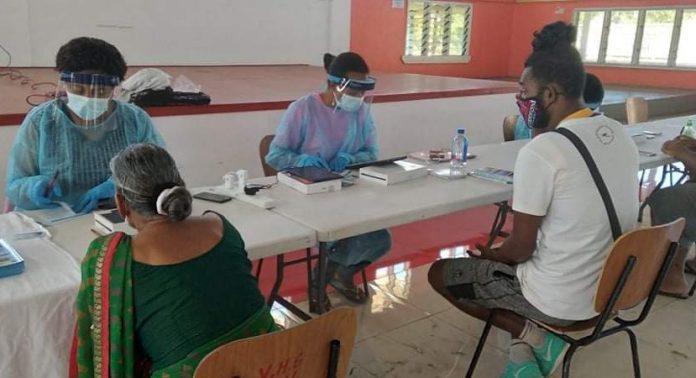 Positive COVID-19 cases have spiked yet again for Fiji with 873 new cases and three deaths reported for the island nation Monday.

Ministry of Health and Medical Services permanent secretary Dr James Fong said the first death is a 56-year-old woman from Vatuwaqa in Suva who died at home.

Dr Fong said the woman’s family reported that she had been feeling unwell for a week.

He said the woman had already received her first dose of the vaccine in early July.

Dr Fong said the second COVID-19 death was a 87-year-old woman from Nasinu.

He said the woman had presented to the FEMAT field hospital in severe respiratory distress.

“Her condition worsened at the FEMAT field hospital and she died two days after admission,” Dr Fong said.

“Her family reported that she was feeling unwell with cough and fever prior to her presentation. She was not vaccinated.”

Dr Fong said the case that was previously under investigation had now been classified as a COVID-19 death.

“This is a 15-year-old from Colo-i-Suva who was declared dead on arrival by the attending medical officer at the Raiwaqa Health Centre. This means that she either died at home or on her way to the health facility.

“Her family reported that she had been feeling unwell for two days. Her symptoms included a cough, shortness of breath and chest pain. She was not vaccinated; she was not in the target population of people 18 years and over that are eligible to receive the vaccine.

“There have been five more deaths of COVID-19 positive patients. However, these deaths have been classified as non-COVID deaths by doctors. Doctors have determined that their deaths were caused by serious pre-existing medical conditions and not COVID-19.”

“There have now been 58 deaths due to COVID-19 in Fiji, with 56 of these deaths during the outbreak that started in April this year. We also have recorded 26 COVID-19 positive patients who died from the serious medical conditions that they had before they contracted COVID-19; these are not classified as COVID-19 deaths.

“There have been 132 new recoveries reported since the last update, which means that there are now 9,310 active cases. There have been 11,315 cases during the outbreak that started in April 2021. We have recorded a total of 11,385 cases in Fiji since the first case was reported in March 2020, with 1,991 recoveries,” said Dr Fong.

“The 7-day average of new cases per day is 696 cases per day or 787 cases per million population per day. With daily increases in cases we are also seeing increasing cases of severe COVID-19 and increasing deaths.

“With increasing daily cases, hospitalisations, and deaths, we are asking all Fijians to get vaccinated as soon as possible,” said Dr Fong.