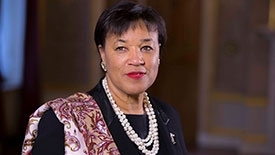 The Commonwealth Secretary-General, Patricia Scotland, has called on political leaders in Samoa to uphold the rule of law and adhere to the values and principles set out in the Commonwealth Charter.

Speaking on the situation, the Secretary-General said:

“The Commonwealth is a community that is underpinned by shared values and principles, including democracy, respect for the rule of law and the separation of powers. As a member of the Commonwealth, Samoa has not only committed to these tenets but has also been a champion of these very values and principles in the past. The current state of affairs in Samoa has therefore deeply saddened me.”

The Commonwealth Secretary-General has been in contact with the Human Rights Protection Party leader, and caretaker Prime Minister, Tuilaepa Aiono Sailele Malielegaoi, as well as with the leader of the Fa’atuatua i le Atua Samoa ua Tasi Party, Fiame Naomi Mata’afa.

“I call on all parties to respect the rule of law, and the role of each of the branches of government to carry out their respective constitutionally mandated responsibilities.

“I have been encouraged that both parties have sought recourse for their grievances in the courts and I urge all to accept the decisions of the courts in their entirety. Adherence to the rule of law must be uniform and universal. This speaks to the spirit of equity and justice which is at the heart of good governance,” she said.

UN calls on everyone to play a role in disaster response