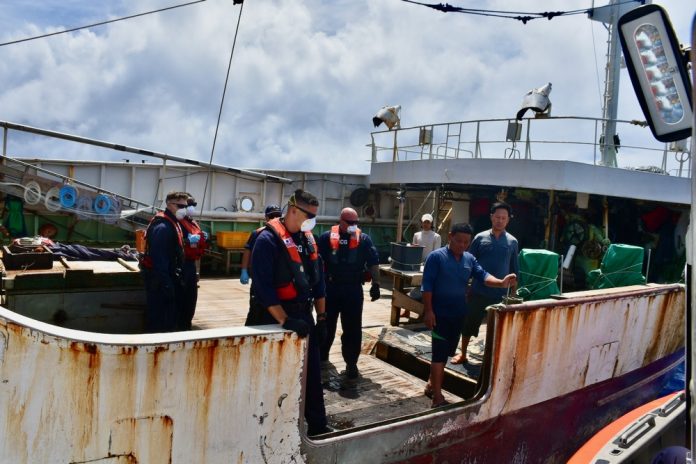 And while the Department of Defence is committed to our allies and partners like the Federated States of Micronesia, the Republic of the Marshall Islands, and the Republic of Palau which have established international agreements for free association with the U.S, illegal, unreported and unregulated (IUU) fishing is a serious threat to their security and stability and ours.

“Illegal, unreported, and unregulated fishing is a collection of dishonest fishing practices, both on the high seas and in areas within national jurisdiction,” said U.S Coast Guard Lt. Cmdr. Jason Holstead, the 14th District Living Marine Resource Officer. “IUU fishing includes fishing that is illegal, in contravention of existing laws and regulations, unreported, not reported or misreported, and/or unregulated, executed by vessels without nationality and/or conducted in areas where the flag State is not a party to international agreements or in areas where fishery management measures do not exist.”

Holstead continued, “The Pacific Ocean supplies about 70 percent of commercially-landed tuna and 65 to 70 percent of the global value of tuna at both the dock and the final point of sale. The western and central Pacific is home to the world’s largest tuna fishery, yielding 57 percent of the total catch in 2014. Responsible fisheries management is vital to our Nation’s well-being, prosperity, and security. We must preserve the world’s fragile marine ecosystems to ensure economic prosperity and thriving oceans today and into the future. The U.S Coast Guard works to ensure that our oceans are healthy and resilient, safe and productive to support global food security.”

To combat IUU fishing in the Republic of Palau, the Division of Marine Law Enforcement works with the U.S Coast Guard and other agencies and several non-profit organisations but it’s a challenge for everyone involved.

“It’s important to Palauans because I think fish is the main staple food for Palauans from ages ago till now,” said Police Lt. Commander Emerson Nobuo, Chief of Division of Marine Law Enforcement and Captain of the PSS Remeliik II.

“The primary role of the DMLE is maritime security and the protection of our natural resources in our EEZ,” said Nobuo. “We’ve been in the system for almost 28 years, the marine law enforcement in Palau, and we’ve been slowly getting assistance from Australia, the U.S, Japan and Taiwan and we’re slowly advancing but while we’re slowly advancing, fishing fleets are advancing faster than us.”

“I think the biggest aspect for us here in Palau is capacity building, getting our law enforcement, getting our government up to par with the rest of the world,” said Jennifer Anson, National Security Coordinator for Palau. Anson rests assured that under the protection of the U.S, through the compact, the U.S will step in and ensure the defense and security of Palau. “But we also want to build up our own capacity to able to face the challenges in the world around us,” said Anson.

Echoing similar sentiments about how to best address IUU fishing in the Pacific, Surangel Whipps Jr., the president of the Republic of Palau said, “If all of the countries took an active role and say hey, if you are a vessel that’s registered in my country and you’re going out and doing piracy, you should be penalized at home, too.”

Working with the National Oceanic and Atmospheric Administration, the Department of State, and Department of Defense, the U.S. Coast Guard will spearhead the whole-of-government effort to combat Illegal, unreported and unregulated fishing in the Pacific.

“The U.S Coast Guard combats illegal fishing and other maritime threats across the Pacific, including providing support to Pacific island countries and territories to protect their resources, security, and maritime sovereignty,” said Holstead. “Combating illegal fishing is part of promoting maritime governance and a rules-based international order that is essential to a free and open Indo-Pacific.”

The Coast Guard isn’t alone in combatting IUU fishing. In 2015, the president of the Republic of Palau at the time, signed into law the Palau National Marine Sanctuary Act establishing one the world’s largest protected areas of ocean, fully protecting about 80 percent of the nation’s maritime territory covering 193,000 square miles.

“I think the Palauan National Marine Sanctuary, kind of scared a lot of them off,” said Nobuo. “Because five years…ten years ago, the activities here in Palau with IUUs was very big. We can go out and stop IUUs, and just this last patrol, even with aircraft surveillance, the only spotted a few in the edge of the EEZ, it’s not like ten years ago where they’re all over the place.”

Nonprofit organisations have also gotten involved. OneReef was founded on the insight that local communities are the most effective environmental stewards when armed with the right partnerships and resources. In 2010, OneReef began working with the Helen Reef community to help protect the reefs for future generations.