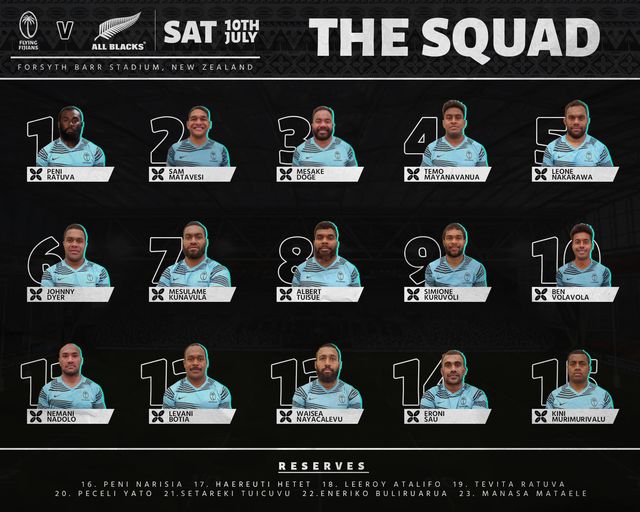 Tailevu halfback Simione Kuruvoli has a huge role to play for the Flying Fijians as Head Coach Vern Cotter named his 23-member run-on team for the first test match against the All Blacks in Dunedin on Saturday.

Kuruvoli who has been part of the Flying Fijians since last year gets an opportunity to start after experienced halfback Frank Lomani together with Mosese Sorovi and Teti Tela could not travel to Christchurch due to the recent COVID-19 outbreak in Australia.

Cotter said “He has big shoes to fill but he has trained really well, speaks and connects well with Ben Volavola plus his got Kini Murimiruvalu at full-back who will also guide him.

Seta Tuicuvu will be covering substitute for full-back, first five and halfback. He is a talented player, he doesn’t talk much but he played very well at halfback during training and impressed us enough to be on the bench.”

Despite a short preparation time, Cotter has managed to put up an experienced forward pack who can match up the power and pace of the All Blacks upfront.

Peni Ravia, Sam Matavei and Mesake Doge will lead the pack in the front row, guided by the experienced hands of Leone Nakarawa in the second row and Albert Tuisue at backrow.

Cotter said “Leone Nakarawa coming back in the team has helped cohesion in the lineout and lineout calling as he brings experience.

Some young players have been named on the bench, such as Peni Narisia who plays for Brive has been playing well and has impressed us.”

He added “We will need leadership and the forwards will have to be very good because we have to protect Simione Kuruvoli who is only having his second game with Fiji against the All Blacks and his opponent is Aron Smith, so it will be a great day for him, therefore, the forwards must be strong to protect him.

Our backline which has always been a strength sees experienced players dominating with Ben Volavola and Simione Kuruvoli sharing the halves position, captain Levani Botia and Waisea Nayacalevu will marshal the midfield, strong and powerful runners Nemani Nadolo and Eroni Sau are on the wings while Kini Murimurivalu is at full-back.

Cotter added “Eroni Sau has trained very well and he has fitted in quickly. He has impressed us and had a very good season with Edinburgh so his continuing that form, Nemani has had a big season with Leicester with Kini Murimurivalu and Waisea Nayacalevu has also had a good season.”

“We have been happy with the preparation, that hasn’t been ideal but when we see what’s happening in Fiji, we just want to play well and hopefully we will lift spirits on the island.

Flying Fijians face the All Blacks at 7pm at the Forsyth Barr Stadium in Dunedin on Saturday.

Flying Fijians vs All Blacks Line-Up

(*) indicated the debutants in the squad.