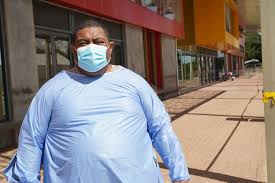 There is no recorded Covid-19 Delta variant in the country so far, although the risk of it entering is high, says Papua New Guinea Pandemic Response deputy controller Dr Daoni Esorom.

He was responding to claims that it could be in the country already but yet to be detected because of the low level of testing.

He agreed that more testing needed to be done to pick up cases so that positive samples could be sent for genome sequencing to prove whether PNG has another variant.

Dr Eosorom said Australia and Fiji were currently in lockdown because of the surge in the number of the Delta variant cases.

Particular attention too is on Indonesia, which shares borders with PNG.

“This variant is different to the original virus,” Dr Esorom said.

“Some studies show that its efficiency of transmission is 60 to 70 per cent. It transmits very fast and can result in a lot of sick people and a lot of hospitalisation.

“According to the immunological curve, our trends are going down. But with the Delta variant, it will track up very fast if we don’t do anything,” he said.

Meanwhile, more than 75,000 doses of the AstraZeneca vaccines from the 132,000 donated, have to be used before they expire this month, an official says.

Dr Esorom said health authorities were struggling to convince people around the country to get vaccinated.

So far, only 54,932 people around the country have been vaccinated: 7,604 health workers, 41,477 essential workers and 5,851 others including those with comorbidities.

The vaccines sent to Western, Southern Highlands and East Sepik will expire on July 18.

The vaccines sent to all the province will expire on 29 July.

The 14 who reported minor side-effects have fully recovered.

“The biggest challenge is that we are struggling to get (more) people to come for vaccination,” Dr Esorom said.

“Misinformation is the major reason preventing people from getting the vaccine. We need to drive the demand for vaccination. We need to be giving facts to people on the benefits of vaccination.”
He said vaccination was now open to everyone above 18 years of age.

In Port Moresby, people can get the first jab at the Rita Flynn centre and the second jab at the National Football Stadium. “We also have from New Zealand 146,000 doses kept at the area medical store. So there is enough for the second dose,” he said.

“Last week, we received 200,000 doses of Sinopharm from the Chinese government with 21,000 taken care of by the Chinese Embassy for their citizens,” he said.