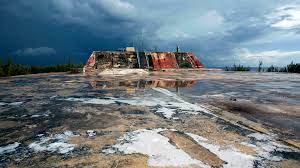 The French government denied any cover up on Friday over radiation levels in the Pacific following its nuclear testing in the region, as discussions were held in Paris about the legacy of the explosions.

“There was no state cover up,” Genevieve Darrieusseq, junior defence minister, told AFP in a brief comment on the sidelines of the event where she has ruled out any official apology from France.

In March, online investigation site Disclose created waves when said it had analysed some 2,000 pages of French military documents declassified in 2013 about the nearly 200 tests carried out around French Polynesia.

Using statistical modelling and help from academics and specialists, it concluded that “French authorities have concealed the true impact of nuclear testing on the health of Polynesians for more than 50 years.”

The roundtable discussion, which Macron attended on Thursday without making any public comment, has met with a mixed response from Polynesian politicians.

MP Moetai Brotherson, a supporter of independence who sits in the national parliament representing the archipelago, has refused to attend unless France apologises.

His party, the Tavini Huiraatira, has announced it will organise a rival event in Tahiti on 02 July.

But the head of the region, which comprises more than 100 islands, has welcomed the initiative despite his previous highly critical comments of France’s “contempt and arrogance”.

“We felt that the president of the republic had a real desire to turn this painful page for all of us, with the resources that will need to be put in place in the future, so that Polynesians can rebuild the faith that we have always had in France,” Edouard Fritch said.

“It’s a strong signal that he sent,” Fritch added, commenting on Macron’s pledge to the conference that he would travel to Tahiti on 25 July.

Up until now only 63 Polynesian civilians, excluding soldiers and contractors, have received compensation for exposure to radiation from the nuclear tests, according to Disclose.

The website said it had used data to reassess the pollution on the Gambier Islands, Tureia and Tahiti after the six nuclear tests considered to be the most contaminating in the history of French tests in the Pacific.

It claimed that its conclusions were starkly different to those of the French Alternative Energies and Atomic Energy Commission (CEA), whose figures served as the reference for compensation for victims of the tests.

In one instance, Disclose said that radioactive soil deposits on one atoll had been under-estimated by more than 40 percent.

The Mururoa and Fangataufa atolls saw 193 nuclear tests over three decades until then-president Jacques Chirac ended the programme in the 1990s after global pressure to call time on the explosions.

In 2016, former president Francois Hollande acknowledged during a trip to the region that the tests had had “an impact” on health and the environment and promised to revamp the compensation process.

He also paid tribute to the contribution made by the islands, saying that without the tests “France would not have nuclear weapons and therefore would not have a nuclear deterrent”.

French Polynesia, with a population of around 300,000, is one of three French territories in the Pacific.