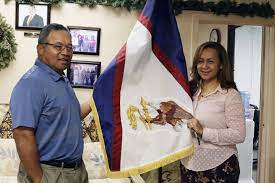 In a decision citing American Samoa cultural traditions, those born in the U.S. territory shouldn’t have citizenship automatically forced on them, a federal appeals court ruled Wednesday.

The 10th U.S. Circuit Court of Appeals ruling reverses a lower court ruling that sided with three people from American Samoa who live in Utah and sued to be recognised as citizens. The judge ruled the Utah residents are entitled to birthright citizenship under the 14th Amendment. He then put his ruling on hold pending appeal.

U.S. Congress should play a bigger role than the courts in deciding citizenship for those in territories, the appeals court ruling said.

American Samoa is the only unincorporated territory of the United States where the inhabitants are not American citizens at birth.

Instead, those born in the cluster of islands some 2,600 miles (4,184 kilometers) southwest of Hawaii are granted “U.S. national” status, meaning they can’t vote for U.S. president, run for office outside American Samoa or apply for certain jobs. The only federal election they can cast a vote in is the race for American Samoa’s nonvoting U.S. House seat.

The ruling notes that American Samoa government leaders and others opposed the lawsuit because they are concerned automatic citizenship could disrupt cultural traditions, such as communal land ownership and social structures organised around large, extended families led by matai, those with hereditary chieftain titles.

“There is simply insufficient caselaw to conclude with certainty that citizenship will have no effect on the legal status of the fa’a Samoa,” or the American Samoan way of life, the ruling said. “The constitutional issues that would arise in the context of America Samoa’s unique culture and social structure would be unusual, if not entirely novel, and therefore unpredictable.”

“It is also vindication for the principle that the people of American Samoa should determine their own status in accordance with Samoan culture and traditions,” he said.

A path toward U.S. citizenship exists for those who want it. But some say it’s costly and cumbersome. Non-citizen nationals of American Samoa are entitled to work and travel freely in the United States and receive certain advantages in the naturalisation process.

Neil Weare, one of the attorneys representing the plaintiffs, said they are disappointed by the ruling, and are reviewing next steps. Options include asking a wider panel of appeals court judges to hear the case or taking it to the U.S. Supreme Court.

Weare is president of Equally American, which advocates for equality and civil rights for people in U.S. territories.

He said he was impressed with a dissenting judge’s opinion.

”When the Fourteenth Amendment was ratified, courts, dictionaries, maps, and censuses uniformly regarded territories as land ‘in the United States,’” wrote Judge Robert E. Bacharach in his dissent.

Self-determination is a highly valued principle in American Samoa, said Line-Noue Memea Kruse, adjunct faculty in Pacific islands studies at Brigham Young University-Hawaii and whose book is cited in the ruling.

“There are many foreign interests looming over these citizenship cases,” she said. “This is not the end. They will keep pushing. This to me is a form of inter-territorial hegemony,” said Line-Noue Memea Kruse….