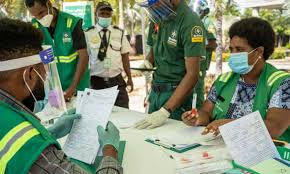 The cases were reported in ten provinces with National Capital District reporting the highest of ten cases followed by both West New Britain and Western Highlands with seven cases each.

All 22 provinces including the Autonomous Region of Bougainville (AROB) have reported cases.

While the numbers of people infected with the Covid-19 virus continue to soar in PNG, the Health minister Jelta Wong, says they have it under control.

In the past four months Covid-19 infection numbers in PNG have climbed at a rate of about 1,000 a week with total infections standing at nearly 17,000.

But Wong believes that with the regime the government has in place the outbreak was not out of hand.

“We have managed to isolate people within the homes as well as the infrastructure the government has put aside.

“With that 17,000 we have also got about 10,000 that have recovered from Covid, and every day we still push the vacccine rollout, so we have it under control at the moment.”

As of Tuesday last week just under 40-thousand people across PNG’s 22 provinces had received their first dose of the AstraZeneca vaccine.

Meanwhile, according to the minister, PNG health officials are struggling to sway elements of the public about the threat posed by Covid-19

Wong said that to ram home the message about the seriousness of Covid-19, they are using the media to advertise and sending health workers into communities to raise awareness.

But he conceded, health authorities can only do so much.

“The government is doing every thing it possibly can to ensure the people are safe but it’s not compulsory for the people to take the vaccine.

“And we can only keep pushing the agenda in communities and we allow our people to choose whether they want to follow the Covid-19 protocols when they do get Covid-19 or take the vaccine.”

Wong said that while PNG has a population of nine million, the government was focussing on vaccines for the elderly, who make up 20 percent of the population