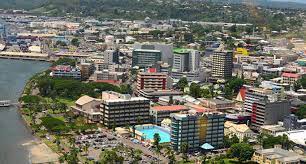 Fiji’s second COVID-19 wave continues to batter the economy, and a series of market updates released by companies listed on the South Pacific Stock Exchange make for sobering reading.

None of the listed companies are putting numbers to the impact on their bottom line, although all are assuring their shareholders that they have business continuity and COVID-response plans in hand.

Fijian Holdings Ltd (FHL) says the second wave has seen the closure of Basic Industries, Pacific Cement and Life Cinemas. Its tourism businesses—South Sea Cruises and Ritam Investment (owners of the Sheraton Resort and Spa and Tokoriki Island — continue to be affected by border closures. FHL’s other businesses continue to operate virtually, with “low business activities,” while its RB Group and New World supermarkets and Golden Manufacturers continue to operate under COVID-19 protocols as essential businesses. FHL says it will be faced “with the huge challenge of meeting the targeted results and shareholder expectations” when it closes its financial year at the end of this month. “It is crucial at this stage to maintain good liquidity and manage cash flow wisely to ensure business passes through this difficult time,” its statement to the SPX says.

While Paradise Beverages’ (PBF) Rum Co of Fiji and Fiji Brewery businesses are not producing their usual product lines, Rum Co has produced over 8000 litres of hand sanitiser to the Fiji government since 19 April. It’s Vailima Brewery in Samoa is operating within Government-mandated restrictions. The lockdowns will affect the company’s financial performance it says.

FMF Foods falls into the essential business category and so “has been operating in full swing.” However, costs have gone up as it has had to work around containment areas, and meet COVID safe protocols. FMF says:” With the lockdown in many countries and the port congestions, we are witnessing erratic shipping schedules coupled with the increase in raw materials costs and logistics costs. The economic downturn following the pandemic and the current containment measures have affected consumers spending and we are seeing a reduction in our sales volumes which will have an impact on the year-end financials.” FMF has put all major new capital expenditure programs on hold.

Another essential service, Amalgamated Telecom Holdings (ATH), which has just raised FJD$112 million (US$56 million) at the closure of its non-renounceable rights issues—says the pandemic has caused increase demand for data and Internet, although some of its subsidiaries have recorded losses. It says robust, functioning telecommunications networks and services will be critical to “re-establishing a new normal.”

The most recent listing on the SPX, Port Denarau Marina (PDM) says restrictions on movements means the commercial passenger segment of its businesses has stopped and many of its tenancies have been closed. Contactless provisioning for outer islands and the Blue Lane initiative continues; 15 cruisers and three superyachts have been received this season. PDM says its cashflow situation is stable, and rents at the marina continue to be discounted.

VB Holdings (which trades as Niranjans) and says the second wave has seen the business experiencing a “much more severe impact than last year.” “While our revenue streams are from rental income and fleet management, we are mindful that our tenants and fleet customers are facing disruptions in conducting their operations.”.

Fiji Television says, “due to this crisis, the decrease in economic activity has resulted in a substantial decrease in the forecasted sales for FTV financial year ending on 30th June 2021.”

Language school, Free Bird Institute has reported a 40% decline in total revenue in the first quarter of this year, which it says was “largely driven by the decrease in service fees and in-house insurance income as a result of the decrease in the number of students”. Free Bird saw a drop of 800% in enrolled students for the first quarter of this year—just 32 students as compared to over 300 last years. Free Bird has chartered flights and had an additional 100 students arrive in April, and says this model is likely to continue.

Pleass Global has had a team of staff working and living at its Namosi site, which has enabled it to keep operating. In its statement, Pleass it has taken significant cost control measures to reduce its exposure. “It is a reality though, that a significant part of our revenue will be affected by the discontinuance of flights and closure of hotels and resorts. Tourism, being a significant part of our business, resulted in shrinkage of the domestic market along with the continuing decline in consumer spending.” PGL says it is seeing strong domestic and export demand for its water products.

Vision Investments (Courts, SportsWorld, Best Buys for Business, Carpets International, Vision Motors, Mahogany Industries (Fiji), Vision Finance and Home & More in PNG) says it has lost approximately one month’s sales due to lockdowns imposed in the Nadi/Lautoka areas, and this will be reflected in its operating results. However, it also says, “based on the requests received from customers, at this stage we do not anticipate any major impact on the Company’s hire purchase loan book.”

Kinetic Growth Fund says it expects the economic downturn will continue for some time, but the impact on its business is difficult to predict or quantify. “KGF’s prospects will reflect both the general business environment and developments within sectors of the economy in which KGF is invested. These economic effects associated with COVID-19 continue to evolve,” it says in its statement.

Toyota Tshusho (Asco Motors) says the immediate impact of the second wave of COVID has been “a decline in sales across new product sales, aftermarket support divisions, and tourism-related businesses such as car rental and marine product sales”. A dramatic decline in new car sales was also reflected in the Reserve Bank of Fiji’s most recent monthly update. The company operates in other Pacific Islands and says “our subsidiary countries, American Samoa, Tonga and Samoa are presently COVID-19 contained. The economic recovery in the countries mentioned above is positive albeit gradual due to the border closures. The expectation is our subsidiaries will achieve their respective targets this year, underpinned by continued economic recovery and order opening later in 2021 or early 2022.”

Coconut furniture manufacturer, Pacific Green says it has systems in place to continue operations on a reduced scale, and had anticipated the second wave. Pacific Green says it is confident of getting through this stage while telling shareholders that “COVID 19 related disruptions to the business may be around for a while, forcing us to adapt to the new normal with low profit and results.”

The true impact of COVID-19 on listed companies will become clear in the next few months as they close their financial accounts. Although the closure of offices and print shops means that several listed companies have been unable to hold their annual general meetings as scheduled, most have undertaken to do so as quickly as possible.