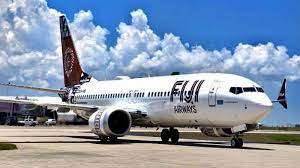 Flight FJ2201 took off from Seattle on Tuesday and made a stop-over in Honolulu for a day, before heading for Fiji.

“Fiji Airways confirms receiving delivery of its third Boeing 737 MAX aircraft on Thursday evening (27 May), following the acceptance of return-to-service requirements as announced by the airline on 1st April,” said an airline spokesperson.

“Once approved for service by the regulators, the aircraft will be used for cargo and repatriation flights as earlier announced.”

Fiji Airways didn’t respond to Fiji Times question on whether payment has already been made for this latest plane and when will the airline receive the remaining two Boeing 737 MAX aircraft.

The national carrier had purchased five MAX8 aircraft but had only taken delivery of two before both aircraft were grounded in March 2019 after fatal crashes with other airlines using the same jets.

The Civil Aviation Authority of Fiji (CAAF) had sent a team to Seattle last month for regulatory certification checks and inspections before delivery.