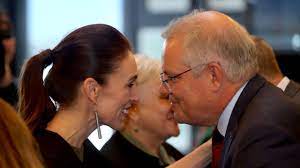 Australia’s Prime Minister has hinted at expanding the trans-Tasman travel bubble to include other Pacific Islands after touching down in New Zealand for talks with his Kiwi counterpart Jacinda Ardern.

The visit comes after the opening of the trans-Tasman bubble last month and the Prime Minister hinted at expanding the travel bubble.

“We are very focused on supporting our Pacific family, and the idea of a bubble that goes beyond New Zealand and Australia is a real possibility,” Morrison told reporters.

He spoke to colleagues in the region and noted Fiji was going through a “difficult time” at the moment but Australia was supporting the nation.

It was not clear what countries could be included in the expanded bubble.

Morrison also hit back at criticism from Victoria’s Acting Premier James Merlino who said he was “beyond disappointed” the federal government refused to help the state during its fourth lockdown.

“We will continue to support Victoria to get Victoria open and to do everything we can to ensure that Victoria does not close itself again.”

The state recorded another five cases of Covid-19 on Sunday and is in the midst of a seven day “circuit-breaker” lockdown to help prevent the spread of the virus.

The Australian and New Zealand leaders shared a traditional Maori Hongi greeting and signifies the sharing of life force.

It is said the god Tāne-nui-a-Rangi moulded the shape of the first woman, Hine-ahu-one, from earth and breathed life into her by pressing his nose against hers.

The moment between Ardern and Morrison is politically significant as it is believed to be the first meeting of world leaders without masks in a nation devoid of COVID-19 since the pandemic began.

Rising tensions with China and the severe economic impact of the pandemic in the Pacific are expected to be the focus of the meeting.

It is only Morrison’s second time leaving Australia in more than a year and he noted the last time he met Ardern was in Sydney at the start of the pandemic.

He attended a business function in Queenstown on Sunday before holding a private diner with Ardern and both leaders’ partners.

There will be more formal talks on Monday between the two.

“We’ve got 150 empty chairs behind us that symbolise innocent refugees offshore, in Nauru and Manus Island,” the former soccer commentator said.

“We need to get these people to safety.”