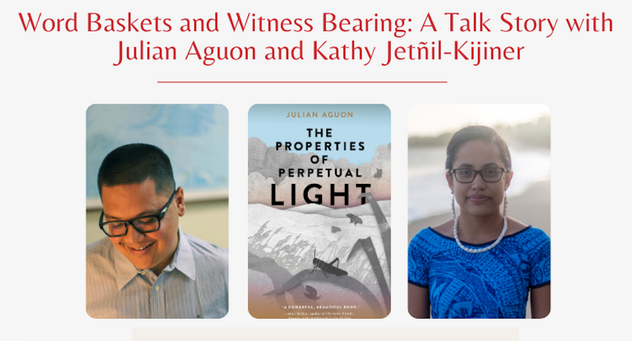 For Pacific writers Julian Aguon and Kathy Jetñil-Kijiner, art and activism are inseparable. But while creative expression can be an act of resistance in itself, both authors also see it as a powerful means of fostering resilience and inspiring others to action.

Aguon, a human rights lawyer and writer from Guam, and Jetñil-Kijiner, a Marshallese poet and activist, are both alumni of the East-West Center in Honolulu and appeared together in a recent EWC online “talk-story” event, “Word Baskets and Witness Bearing.”

The forum, part of the Center’s Distinguished Leader Lecture Series, celebrated the publication of Aguon’s latest book, a collection of poetry and prose titled The Properties of Perpetual Light (University of Guam Press). Like Aguon’s previous works, the collection has been drawing praise from a wide array of writers and scholars, including Naomi Klein, Junot Diaz, Katerina Teaiwa and Alice Walker, who called it “a powerful, beautiful book.”

A force for change

With EWC moderator Gretchen Alther encouraging the writers to ask questions of each other, both acknowledged that creative writing is integral to their social activism work, but also emphasized that their art came first.

“I think I would consider myself a poet before I would consider myself a leader,” said Jetñil-Kijiner, who currently serves as climate envoy for the Republic of the Marshall Islands as well as the director of Jo-Jikum, a Majuro-based nonprofit that involves youth directly in environmental action. “For me, poetry has always been a critical way of engaging with the world and processing emotions. It makes the connection between my work and who I am as a Marshallese woman.” Attending university in California’s Bay Area, she said, “taught me how poetry can speak to movements and be a force for change.”

Aguon talked about his work as a legal advocate for Guam’s environment and Indigenous Chamorro rights, including a recent successful submission to the UN filed by his law firm, Blue Ocean Law, on the impacts of increased US military presence in Guam, which he called a “gigantic moment” in the island’s history. “

“There’s a preconceived notion about what a lawyer is and does,” he said, “but my life is a constant contestation of that notion. I tell young people that the law as a profession often attracts people who see it primarily as a way to accumulate obscene amounts of private wealth and power, as opposed to being a vehicle to work for the greater good. Those are very different impulses, and every profession needs people who are trying to disperse power, as opposed to hoarding it.”

Jetñil-Kijiner said she was first introduced to Aguon’s writing while she was away at college and her mother, former Republic of the Marshall Islands President Hilda Heine, sent her a transcript of a commencement address he had recently given. “It was a speech about his mother’s bangles and bracelets, drawing this connection about what he was hoping for the people,” she recalled. “He was connecting the military, nuclear legacies, activism, literature, art. I remember sitting there and just crying and crying because it was so beautiful. It was exactly what I needed to hear since I wasn’t around family and people who understood these histories and these intersections.”

Aguon’s ability to interweave pain and beauty is key to more than just his literary success—it is bedrock to his efforts as an activist lawyer and community organizer. “Hope and grief are bedfellows in a way,” Aguon said, reflecting on the role of art in supporting this work. “We have grief in spades but we also have beauty in spades, and they’re both part of our lived experience.”

Both writers acknowledged that it can be emotionally exhausting to be held up as a “spokesperson” for their people, especially when grappling with complex and deeply personal issues. But providing this type of first-person accounting is critical, they said, in countering what Aguon calls “the no-end-in-sight narrative”—a stereotype that portrays Pacific Islanders solely as victims.

“We all know that the Marshall Islands are dealing with climate change and the nuclear legacies,” Jetñil-Kijiner said. “But I’ve had really interesting conversations with friends and artists who are pushing back against those narratives, saying, ‘Aren’t there more stories that we can tell? Stories of celebration, beyond just stories of survival?’”

For Aguon these stories, and the creative people who step forward tell them, are critical to building a better future for Pacific peoples. “Artists have the capability of reminding us who we are, and who we can be,” he said. “I think we need to lean on them, especially in hard times. Really good art lays itself down like a bridge and says, ‘Walk over me.’ It helps you get to someplace good, where you can feel the sunshine on your face.”