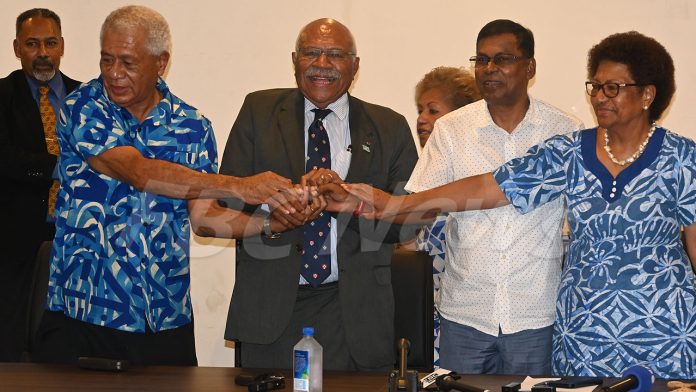 The coalition of the People’s Alliance (PA), the National Federation Party (NFP), and Social Democratic Liberal Party (SODELPA) has been formalised to form a new government in Fiji.

The parties’ representatives held an official signing ceremony last night at the Yue Lai hotel in the same board room where negotiations were held the day before.

The decision will be formally communicated to the President by the coalition.

In a twist of events, Duru has written a letter addressed to the Secretary-General to Parliament requesting a deferment, citing anomalies by SODELPA members who voted for the party to partner with the People’s Alliance and National Federation Party to form the government.

This comes after Duru stated last night that he had resigned as party General Secretary.

He said given the importance of the process in choosing the next government, he, therefore, advises that the initial result of the votes by the SODELPA Management Board be deemed null and void.

Duru said more time is needed to rectify the anomalies and processes in deciding the party’s coalition partner.

FBC NEWS are trying to get a comment from Duru and SODELPA on the contents of the letter.

The national broadcaster is also trying to ascertain if Duru still has the authority to pen the letter as he had earlier said he had resigned as party General Secretary.