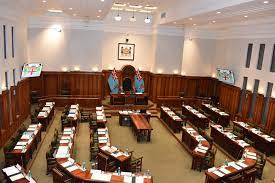 Six women have been elected into Fijian Parliament for the next four years.

Four Members of Parliament have served before while two will be entering the august house for the first time.

Of the 343 candidates contesting the 2022 General Election, 56 were women.

This is the same number of women who contested the 2018 General Election.

Women MPs make up 10.9 percent of the Parliament setting which now has 55 seats.

This is lower than the 21.6 percent in 2020 where there were 11 women representatives in the 51-seat Parliament.

Meanwhile, the Electoral Commission Tuesday returned the Writ of Election to the President of Fiji, Ratu Wiliame Katonivere, after a successful 2022 General Election.

This ceremony took place at the State House in Suva in the presence of the leaders of political parties, members of the diplomatic corp, the Speaker of the House of Parliament and members of the Multinational Observer Group.

The Police Commissioner and the Commander of the Republic Military Force were also present.

In his speech, Ratu Wiliame said he was pleased to have received the Writ earlier than expected.

The President had issued the Writ of Elections on 31 October upon the advice of the Prime Minister for the elections to be conducted and to be returned no later than 28 December 2022.

Ratu Wiliame commended all Fijians who participated in this General Election, the voting process and the conduct of which the count had taken place seamlessly.

“The process of voting was once again seamless across our 100 populated islands. The count was conducted professionally and transparently.”

The President also applauded the Supervisor of Elections Mohammed Saneem and the Fijian Elections Office for being the clear and consistent voice of reason at every stage of the electoral process until the full and final results were known.

He also acknowledged the Multinational Observer Group for following the process closely and being a neutral vote of confidence in the conduct of the 2022 General Elections.

Ratu Wiliame also commended the volunteers who have been part of the election process for the past three weeks and most importantly, he thanked voters who turned up on Election Day to cast their vote.

“You have spoken, and you have chosen your representatives. Your commitment speaks volumes of your patriotic values that we all hold so dear.”

Ratu Wiliame said the ball is now in the court of elected representatives, and he is pleading with them to keep the interest of the country paramount and to further the shared vision of building a better Fiji for every Fijians.

In accepting the elections result, the President said he now looks forward to swearing in the new Government and to the opening of Parliament.

Fiji should know today which party will form government: Gavoka