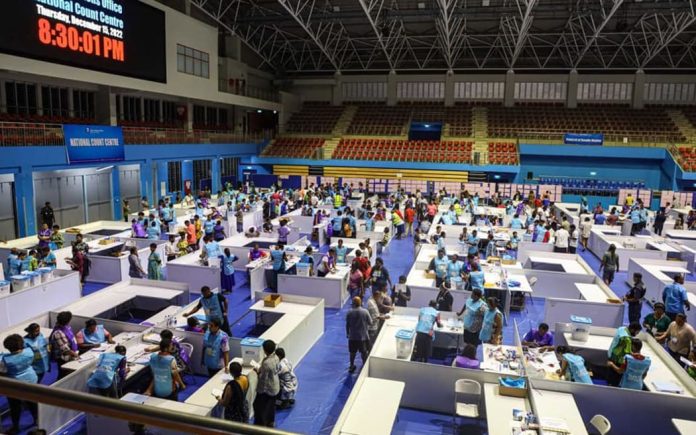 National Federation Party Leader Professor Biman Prasad says the outcome of Fiji’s 2022 General Election reflects the will of the people.

Prasad highlighted this at a joint press conference with People’s Alliance Leader Sitiveni Rabuka, as they prepare for their next step.

He acknowledged everyone that voted for the opposition parties.
“We found that people were just great. They welcomed our candidates. They welcomed us as political party leaders and I just want to say the people were great and I want to take this opportunity to publicly thank everyone who attended our meetings, who helped us to reach out to others. At the end of the day we have an outcome which reflects the will of the people with respect to votes the opposition parties have received.”

Prasad also acknowledged the 54 candidates who contested the General Election under their party banner.

Meanwhile, the People’s Alliance remains hopeful that a favourable decision will be made by the Social Democratic Liberal Party (SODELPA) that is focused on bringing about change in Fiji.

General Secretary Sakiasi Ditoka said they are pleased with the votes received as the party’s campaign was focused on galvanising support for change.

Ditoka said they have made their offer to SODELPA on a coalition and will await a decision.

“We believe it’s a generous offer. We’ll just wait for them. I mean we’ve come with goodwill and with clean hearts and let’s see how they respond.”

Deputy leader Manoa Kamikamica expressed his gratitude to voters for their trust in the People’s Alliance.

He said the votes for the People’s Alliance indicate that people want change.

“We will work hard to bring about what the people of Fiji need which is genuine democratic change in this country and that was the vision when we started this journey. We have a chance to make that vision possible and we will do everything in our power to make it happen.”

Deputy Leader Lynda Tabuya said she hopes SODELPA will reciprocate what the former leader of the Opposition Ratu Naiqama Lalabalavu had done in 2001, putting Laisenia Qarase in power as the kingmaker.

“We are hoping that SODELPA will see. We have institutional memory about what happened in 2001 where the Turaga Bale Tui Cakau, the former leader of Opposition who is now in People’s Alliance, put Qarase in power. The very least they can do is reciprocate what the Turaga Bale na Tui Cakau had done. He’s now in People’s Alliance and to reciprocate by doing the same, said Tabuya.

The People’s Alliance has won 21 of the 55 seats in Parliament.

Undersea volcano sends plume of steam into the skies near Tonga