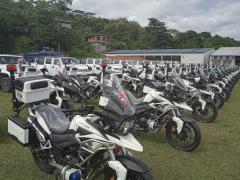 China will today donate at least two water cannon trucks and a host of vehicles to the Royal Solomon Islands Police Force (RSIPF), in yet another sign that it is intent on entrenching its position as a major security partner in the country.

The vehicles will be handed to the RSIPF at a lengthy ceremony on Friday in Honiara with Prime Minister Manasseh Sogavare and China’s ambassador to Solomon Islands Li Ming.

That ceremony will be held just two days after Australia handed over dozens of semi-automatic rifles and 13 vehicles to the same police force in a similar ceremony with Sogavare and senior police officers.

Programme notes say that both Sogavare and Li will deliver speeches, before “mock keys” are handed over for “PRC Assisted Vehicles, Motorcycles and Water Cannons”.

The Chinese police training team in Solomon Islands will also give a brief martial arts presentation at the ceremony.

It’s not clear exactly how many vehicles China will donate, but the ABC has been sent pictures showing two water cannon trucks and more than a dozen vehicles sitting at the main police headquarters in Honiara.

Honiara was rocked by riots last year after anti-government protests turned violent, and Sogavare has repeatedly called for the RSIPF to be given heavier weaponry and equipment to help maintain “stability”.

The donation is another demonstration of the way competition between Australia and China is intensifying in Solomon Islands, as both nations try to cement their position with police and senior politicians.
Australia has long been the dominant security partner for Solomon Islands, and led a regional mission to stabilise the country in 2003 after years of civil unrest.

The Australian Federal Police (AFP) also has a long track record of training and equipping Solomon Islands police over the past two decades.

However, China has rapidly stepped up its own cooperation programme with the RSIPF over the past 12 months, donating anti-riot equipment and replica rifles, conducting police training in multiple provinces and sending Solomon Islands officers to China.

The AFP’s move to donate 60 semi-automatic rifles to Solomon Islands police this week drew fierce criticism from the island nation’s opposition leader Matthew Wale, who warned against “militarisation” of the country and accused Australia of being driven by “anxiety” over China’s policing role.

Former Australian diplomat Mihai Sora — who is now an analyst at the Lowy Institute — said the imagery of back-to-back donations to the RSIPF “easily lends itself to caricature”.

“One can reasonably wonder if the RSIPF officers have had time to wash and press their uniforms in between gifting ceremonies,” he said.

“But the contest for influence is real, and not one that Australia can afford to lose.”

Sora said China was engaged in a “full court press” in Solomon Islands and, in response, Australia was “doubling-down on its long-standing policing relationship with the RSIPF that it has painstakingly built over many years”

However, he said, there was a risk that the donated semi-automatic weapons and water cannons could actually destabilise the country, particularly if they were misused against protesters.

“The Solomon Islands community is better served by policing assistance from Canberra rather than Beijing,” he said.

“But it is unfortunate that domestic political actors are leveraging geopolitics to ask for, and receive, goodies that were previously off the table for traditional partners.

“Things will likely get more complicated from here,” he said.