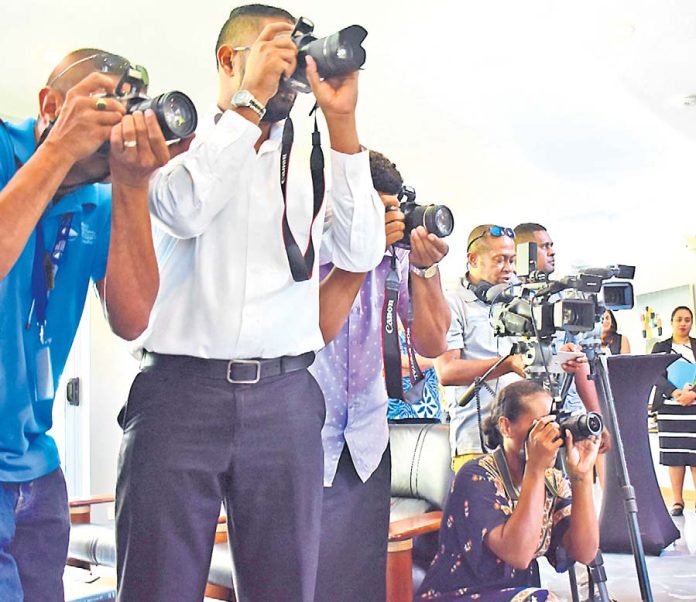 Governments and the international community must take action to protect the people who bring us the news, UN Secretary-General António Guterres said in his message on the International Day to End Impunity for Crimes Against Journalists, observed on Wednesday.

This year also marks the 10th anniversary of the UN Plan of Action on the Safety of Journalists and the Issue of Impunity.

The Secretary-General underscored the importance of a free press, which he said is vital to a functioning democracy, exposing wrongdoing, navigating our complex world, and advancing the Sustainable Development Goals (SDGs) – the blueprint for a more just, equitable and greener future.

“On this International Day to End Impunity for Crimes Against Journalists, let us honour our media workers, and stand up for truth, justice and human rights for all,” he said.

Despite their critical role, more than 70 journalists have been killed this year alone.

“Most of these crimes go unsolved. Meanwhile, a record number of journalists are incarcerated today, while threats of imprisonment, violence, and death keep growing,” said Guterres.

Furthermore, a surge in disinformation, online bullying and hate speech, particularly against women journalists, is contributing to the stifling of media workers around the globe.

“Intimidation through the abuse of legal, financial and other means, is undermining efforts to hold the powerful accountable. These trends threaten not only journalists, but society as a whole,” he added.

Mexico is among the most dangerous places to be a journalist.

Eighteen have been murdered so far this year, according to the UN Educational, Scientific and Cultural Organisation (UNESCO), which maintains an online database on judicial enquiries into journalist killings worldwide.

Patricia Monreal Vázquez has been reporting for more than 25 years, and covers issues related to human rights, gender, and electoral and political issues. She is based in Morelia, capital of the western state of Michoacán.

Monreal said violence against journalists has worsened since 2006, which is when the first cases of journalist disappearances began.

“And this began to discourage, to silence, to generate self-censorship in the media,” she said. “A total of 14 colleagues were murdered from 2006 to date and six are missing. And nobody has been detained here in Michoacán in any of these cases, except for one.”

She believes that this situation, together with adverse working conditions and the lack of development opportunities, have affected the quality of journalism because survival comes first.

“Yes, there is an inhibiting effect, especially at the regional level, and media outlets are being closed due to threats,” said Monreal.

“It is a very complex situation because it involves families,” she continued, citing the 2017 kidnapping and murder of Salvador Adame, director of a local TV station, as an example.

“He had already been buried, and still the following year his family was expelled from their home. Even death is not enough.”

A decade ago, countries endorsed the UN action plan which aims to protect journalists, prevent crimes against them, and pursue teir perpetrators.

“This groundbreaking document was adopted to acknowledge the vital work journalists do – for example when they report on conflicts and crises, or when they inquire into the workings of power and investigate corruption and other forms of injustice – as well as the risks they face when doing this,” said Audrey Azoulay, the UNESCO Director-General.

Much progress has been made since the plan’s adoption, she reported, with concrete measures implemented at the national, regional and global levels.

UNESCO has also played a part, including through training nearly 36,000 judicial, law enforcement and security officials on issues such as freedom of expression and the security of journalists, including online.

However, “journalists continue to be killed at an alarming rate”, said Azoulay. UNESCO data reveals that 955 journalists have lost their lives over the past decade, and 2022 has been the deadliest year since 2018.

Azoulay called for renewed commitment to protecting journalists everywhere, and at all times.

“This means in situations of conflict and crisis, of course, and UNESCO is supporting journalists in Ukraine and Afghanistan, for instance. It also means in times of peace – for that is when most journalists have been killed in recent years,” she said.

The UNESCO chief further called for stepping up efforts online, where new forms of violence have surfaced, especially targeting women, with three in four women journalists having experienced online harassment.