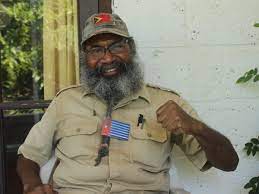 The human rights campaigner Filep Karma – one of West Papua’s most famous former political prisoners – was found dead on a beach in Jayapura, sparking calls for a full and independent inquiry into his death.

Twice jailed for raising the West Papuan Morning Star flag banned by Indonesia, 63-year-old Karma was one of the most prominent and influential campaigners for West Papuan independence.

Police confirmed a body had been found at Base G Beach, a picturesque and popular beach near Jayapura, the capital of Papua province, but would not confirm it was Karma.

“It is true that a body was found by a resident on the beach at Base G, suspected to be Filep Karma, but to be sure, the police are still waiting for confirmation from his family,” Adjunct Commissioner Yahya Rumra of North Jayapura police told Antara News. Karma’s family members subsequently confirmed his death, saying he drowned in a diving accident.

The exiled interim president of the United Liberation Movement for West Papua (ULMWP), Benny Wenda, said he mourned for his colleague and was deeply concerned by the manner of his death.

Wenda said 16 Papuan leaders, many aged in their 40s and 50s, had died “in mysterious circumstances” since 2020.

“The big question is this: how did Filep die? We know he drowned while surfing, despite being a skilled diver. We know that there were four Indonesians with him when he died, but we don’t know if any of them have given testimony.”

Wenda paid tribute to Karma, describing him as a leader who stood for “justice, democracy, for peace and non-violent resistance”.

“His experience of Indonesian brutality never daunted him. He continued to lead the struggle for liberation, whether in prison or in the streets. For West Papuans, Filep was equivalent to Mahatma Gandhi, Nelson Mandela, Martin Luther King. The history of our struggle lived within him.”

Originally from Biak Island and the son of a prominent local politician, Karma studied in Java and worked as a civil servant in the Indonesian government before becoming an outspoken advocate for West Papuan human rights and political self-determination.

Karma was shot in the leg during the Biak massacre in 1998 – when scores of West Papuan independence demonstrators were killed by Indonesian security forces – and was later jailed for raising the Morning Star flag, a symbol of West Papuan independence outlawed by Indonesia. He was released two years later. He was again jailed for “treason” for raising the flag in 2004, serving 11 years of a 15-year sentence.

His body was found at about 7am on Wednesday on Base G beach. Karma was a master diver with decades of experience: his body was found wearing his diving wetsuit, but the suit reportedly had significant damage.

“We urge the ranks of law enforcement and human rights institutions to investigate the cause of the death of the deceased,” Hamid said.

“This investigation is important to answer whether there are indications of criminal acts or human rights violations behind the death of the deceased, because many vocal activists in Papua have become targets of violence,” he said.