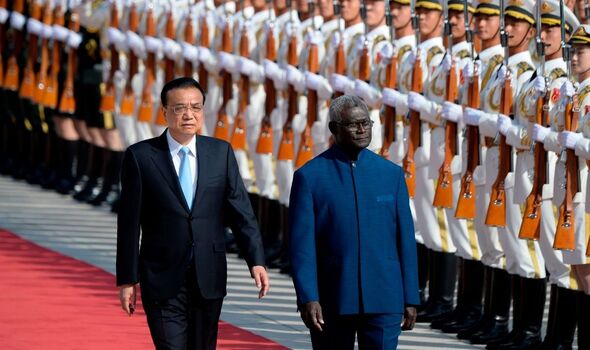 China’s foreign minister is expected to visit the Solomon Islands by the end of the month, in a move that has heightened fears that Beijing plans to establish a naval base on the strategic Pacific territory.

Wang Yi is expected to travel with a large delegation to the Solomons’ as part of a broader visit to a number of Pacific Island countries and could be there as soon as this week, an Australian government source told ABC news.

It is believed he may formally sign a deeply contentious and secretive security pact with the Solomons government – Beijing’s first known bilateral security agreement in the Pacific – which sent shock waves around the Indo-Pacific when a draft was first leaked in March.

The draft referred to Chinese “ship visits” and invoked Beijing’s right to defend its citizens and projects in the Solomons, raising the question of whether it could pave the way for Chinese troops and naval warships being posted less than 1,200 miles from the Australian coast.

The trip’s timing is especially sensitive as Australia is holding a national election on 21 May.

Peter Dutton, the Defence Minister, told Sky News the trip was part of a pattern of aggressive behaviour by China.

“It’s obviously provocative, particularly during the course of an election campaign,” he said. “And I think we, again, need to be eyes wide open about what is happening [with China] in our region, and not just in our region.””

Peter Kenilorea, a high profile Solomons Opposition MP, told The Sunday Telegraph that many islanders, and neighbouring countries, were unsettled that the leaked security pact – which has not been publicly disclosed even to parliament – could give China a “foothold” in the Pacific to advance its “expansionist ambitions.”

The issue has thrust national security concerns into the heart of the Australian election campaign.

James Batley, a former Australian high commissioner to the Solomons, said the recent deals struck between Beijing and Honiara were “a genuinely significant and adverse development.”

“From Australia’s point of view, it represents the realisation of a very long-standing anxiety that has been one of the foundations of Australian policy towards the Pacific – that a potentially hostile power may establish itself in the region,” he said.

“Clearly from China’s point of view, it represents a conscious attempt to disrupt the interests of democratic countries in this part of the world.”

Canberra and Wellington, traditionally Honiara’s main security partners, are wary of any moves that could allow China to cut off key supply lines into Asia and the Pacific in the event of a conflict.

“We’re very aware of what the Chinese government’s ambitions are in the Pacific, whether it be in relation to facilities such as that or naval bases or other presence of their military in the Pacific,” Scott Morrison, the Australian prime minister, said when asked about the deal.

Beijing’s advances towards the Solomons have intensified the hostility that has been building with Canberra in recent years.

In 2021, China lashed out with punitive economic sanctions against key Australian industries, including barley and wine exports, in what was viewed as retaliation to Canberra’s calls for an independent probe into the origins of Covid-19.

Xiao Qian, Beijing’s envoy to Australia, attempted to reassure his host nation this week, writing in the Financial Review that China’s actions in the South Pacific were “conducive to people’s well-being on both sides, and regional prosperity and stability, and will by no means threaten Australia’s security.”

But opposition MP Kenilorea remains unconvinced. “My biggest concern is that it [pact] is so open-ended and not tight enough in terms of what the intentions are,” he said.

“The Solomons Islands is not at all benefitting from this. We don’t have any natural external enemies and the argument that we are doing this because of our own internal security issues is very weak.”

He urged the United States to accelerate plans to open an embassy in Honiara – an intention stressed by Kurt Campbell, President Biden’s Indo-Pacific coordinator, when he rushed to the Solomons in April following news of the security agreement.

The U.S is clearly concerned about Beijing’s interest in the islands.

“The fact that you had a very senior delegation travel in pretty short order underscores that this was viewed as a surprising and disconcerting development,” said Heino Klinck, former U.S deputy assistant secretary of defence for East Asia.
“The reality is that the Chinese over the past ten to 15 years have certainly upped their game in terms of not just diplomatic presence but economic presence, utilising frankly all elements of national power. and we just haven’t done that effectively,” he said.

“The PLA being within operational reach of one of our closest allies is significant. Particularly because the United States is putting more and more U.S military presence alongside the Australians,” he added. “I don’t think it’s a coincidence that the Chinese have targeted the Solomons.