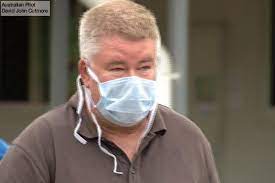 An Australian pilot linked to the biggest drug bust in Papua New Guinea has been convicted and jailed for 18 years.

The Waigani National Court on Friday sentenced David John Cutmore, 57, of Williams Landing, Queensland, Australia to 18 years in prison after he pleaded guilty to charges relating to money laundering by receiving of criminal property (cocaine).

Cutmore had stated that he knew what he did was wrong and apologised to the people and the government of PNG and Australians who reside in PNG.

He stated that he was going through some difficult times and saw the opportunity to transform his life by transporting the cocaine.

He was promised AUD$1 million (around K3 million) for his part in transporting the cocaine into Australia.

Although Cutmore pleaded for a suspended sentence due to his deteriorating health and for him to be extradited to Australia to face prosecution there, presiding judge, Justice Teresa Berrigan, ruled that suspension was not likely to reform or deter the offender.

“As I made clear prior to the offender’s plea, the decision to have the offender transferred to Australia to serve his custodial sentence in a correctional facility in that jurisdiction is not a matter for this court,” Justice Berrigan said.

On 26 July 2020, Cutmore travelled from Mareeba Airport, Cairns, Australia, to PNG illegally in a light aircraft.

He landed at a makeshift airstrip outside Port Moresby near Lealea village, Central Province.

His purpose was to collect cocaine and transport it to Australia.

Upon landing, Cutmore received from two locals 611.1 kg of cocaine, which were loaded onto the aircraft.
The offender attempted to takeoff from the airstrip fell short of the runway and crashed into the tress at the end of the runway.

The drugs were intended for Australia and had an estimated street value of AUD$141,164, over K340 million.

“On the facts described, one might have expected the offender to have been charged with a drug related offence.

“However, at that relevant time, offences under the Controlled Substance Act, 2021, and the severe penalties applying, were yet to come into effect,” Justice Berrigan stated in her decision.

She said offences available under the Dangerous Drugs Act 1952, were punishable up to a maximum of two years of imprisonment.

“It appears that in those circumstances, the State elected to proceed against the offender for money laundering under Part VIA of the Criminal Code. The charge was open to State,” Justice Berrigan stated.

State lawyers have submitted that Cutmore was part of a sophisticated scheme of dealing with dangerous drugs.

It was a sophisticated and well planned offence and his role was to receive the property with the intention of transporting it to another country.

He knew his conduct was illegal.

The maximum penalty for the offence of money laundering was a fine not exceeding K500,000 (US$142,000) or imprisonment for a term not exceeding 25 years, or both.

The State submitted that a sentence within the range of 15 to 20 years was appropriate.

The defence lawyers submitted that Cutmore had pleaded guilty to the charge and co-operated well with the police by surrendering at the Australian High Commission on July 28, 2020, two days after his plane crashed.

The defence also submitted that Cutmore had no prior convictions and was also suffering from a severe illness known as Plaque Psoriasis and Psoriatic Arthropathy, a chronic and occasionally debilitating disease affecting the skin, joints, scalp and nails.

He also suffers from Type 2 Diabetes and had two stents inserted following a heart attack in 2018.

The defence, therefore, asked the court to consider a sentence of six years’ imprisonment.

The defence lawyer further asked the court to exercise its discretion to deduct time spent in custody and to suspend the balance of the sentence having regard to the offender’s age, medical conditions, and the possibility that he may cooperate as a witness in other prosecutions in PNG as well as in Australia.

Justice Berrigan, when handing down her decision, explained that the sentencing of the offender (Cutmore) was for money laundering and not some uncharged drug-related offence.

“Regardless of the nature of the property, this was a deliberate, well-planned offence of international scope, conducted for profit and concerning criminal property of enormous value to organised criminals.

The fact that the property received was cocaine only makes those matters stark,” Justice Berrigan said.

Moreover, Justice Berrigan said that the public interest in the case was paramount.

The danger of the offence lies in the fact that it sought to use PNG as a reception point for criminal property destined for lucrative markets in another jurisdiction.

“Offences like this are difficult to detect,” she said.

“This may be the first of its kind on the facts but it is unlikely to be the last.

The threat of organised crime to the peace and security of the nation, its communities and the broader region was well recognised.”

She said the sentence must serve as a strong warning to potential offenders both within the country and elsewhere that such offences will not be tolerated.

She, therefore, sentenced Cutmore to 18 years in prison without hard labour considering his age and medical conditions. She also exercised the court’s discretion to deduct 2 years and 3 months of the time Cutmore spent in custody.

He will serve a balance of 15 years and 9 months in prison.