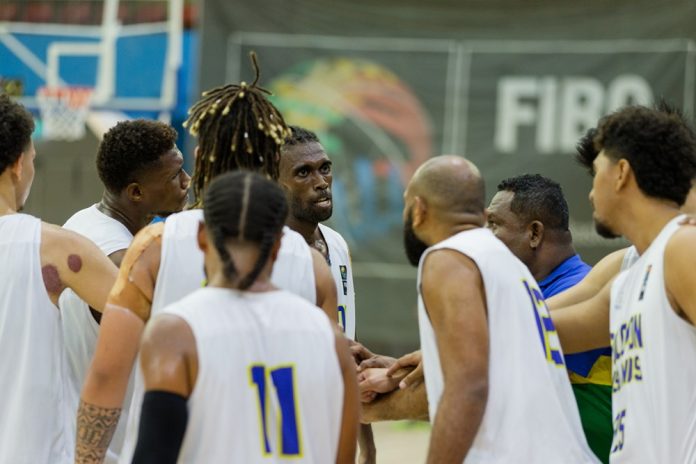 The stage is set for day three of the FIBA Melanesian Cup 2022 with all teams heading in with one win each under their belt after Papua New Guinea, and Fiji returned to the winners circle on day two.

In a tight tussle, Papua New Guinea triumphed over New Caledonia in the gold medal rematch from the FIBA Melanesian Cup 2017, 75-66.

Luther Puleoto from New Caledonia was impressive off the bench in the final quarter owning the paint both offensively and defensively while Jo Delaunay-Belleville finished with 17 points and 3 steals. Unfortunately, it wasn’t enough for the New Caledonians who will come up against the Solomon Islands today in the final pool match of the tournament.

Papua New Guinea Captain, Apia Muri led from the front finishing with 19 points and 13 rebounds. He commented after the game that the team bounced back after an upset defeat on day one at the hands of the Solomon Islands.

“We were overconfident Wednesday, we thought it would be an easy match,” Muir said. “It didn’t happen, so last night we talked about it and stood stronger today. We knew that we needed to win today to stay in the competition.

“We are happy with today’s win and for tomorrow we will stick with the same preparation and give it our best shot, we will take each game as it come.”

Fiji was too strong for Solomon Islands in a fast-paced game that had the crowd on their feet. The host nation coming away with their first win of the tournament 66-57.

Fijian, Esala Banuve finished with 10 points from the bench while Captain, Josh Fox maintained his form with 11 points and 9 rebounds, however the star of the night was 21-year-old, Filimone Waqabaca with 26 points.

“Tonight’s game was pretty good, it was tough, and we stuck to our game plan, we had open looks and knocked those shots down tonight,” Waqabaca said. After a tough loss to New Caledonia, Waqabaca said the boys had a point to prove. “Everyone knows the first game of the tournament is always the toughest one and we were just trying to get used to the slippery court, but no excuses,” he said. “New Caledonia played a good game last night, we just talked about it after the game, had a good night’s rest and then focused on today’s game.”

Waqabaca debuted for Fiji at the 2019 Pacific Games and said the home crowd played a part in getting the team across the line. “It’s pretty special, last time Fiji hosted was in 2003, so it is an honour to play in front of our home crowd so hopefully we can go all the way to finals and win it.”

The top two teams at the Melanesian Cup will qualify for the 2023 Pacific Games in the Solomon Islands. The Pacific Games then serves as the official qualifier for the Oceania region to the FIBA Asia Cup Pre-Qualifiers.