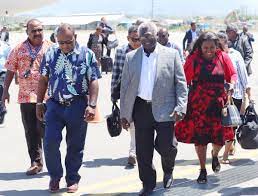 Secretary to Prime Minister Dr Jimmy Rodgers made this stance in response to details that have emerged about accommodation costs for members of the Prime Minister’s delegation.

He told local media at press a conference Tuesday the trip was worth spending because government ‘got all the agendas brought up at global level.’

There are also personal connections that underpin relationship that we need to follow up.

“So it is worth spending,” Dr Rodgers said

He also assured that the fund from the Pacific Forum Fisheries Agency (SPFFA) will be retired through the Ministry of Foreign Affairs.

Permanent Secretary of Foreign Affairs Collin Beck added the cost of the trip is small compared to its benefit.

He said there are number of mandatory events where heads of government are required to attend.

One of it is the Pacific Islands Forums meeting. The second largest is the Melanesia Spearhead Group meeting. On the global level UN General Assembly is where world leaders congregate every year and the Prime Minister always attend.

He said in the recent UN General Assembly more than 190 countries participated where they established cooperation, seeking peace and discussed mutual understanding on global issues.

“This is a platform where leaders talk to each other and try to have great understanding on global issues.

“When we look at development cooperation with international community the cost is small,” he said.

Solomon Star has obtained details of the types of hotels used, daily rates for each hotel in Australia, New York, and the Pacific Leaders’ Summit with President Joe Biden in Washington DC and a five-day transit in Singapore.

Members of the 12-member delegation are listed as:

The 12-member delegation that travelled with Prime Minister Manasseh Sogavare spent a total of seven nights at the Royal Albert Hotel in Brisbane on the way to New York, according to the document.

The cost per room is USD$500 a night per person.

According to the document titled, Budget Proposal for Accommodation and Other charges for the seven nights in Brisbane totalled USD$24, 500 (SBD$230, 696.69).

In New York, the 12-member delegation including Prime Minister Sogavare and his spouse, Emmy Sogavare, spent nine nights at the Westin Hotel costing USD$31, 500 or the equivalent of SBD263, 598.33.

On its return, the delegation flew back via Singapore where members spent five (5) nights at the Hilton Orchard – one of the top hotels in Singapore. The bill for this was USD$17, 500 (SBD164,783.43), according to the documents.

It is unclear why the transit took almost a week for the delegation to spend in Singapore.

Travel and per diems for the 12-member delegation were met by the Honiara-based South Pacific Forum Fisheries Agency (SPFFA), according to a Memorandum dated 05 September 2022.

The memo was written by Secretary to Prime Minister (SPM), Dr Jimmy Rodgers who wrote, “With regards the delegation under Office of Prime Minister and Cabinet (OPMC), FFA has agreed to meet the total costs for airfares and per diems.”

“SIG will only meet the cost for accommodations, and other provisions, including hosting official dinners, transit and local transportation costs and gifts.

In addition, the delegation requested an additional USD$18, 000 for accommodation, claiming the cost of the hotels had gone up because of late payment.

A payment voucher raised for the payment shows the USD$16, 000 was made under Ministry/Department Reference No. PMOCAB584/22, according to the documents Solomon Star has obtained.