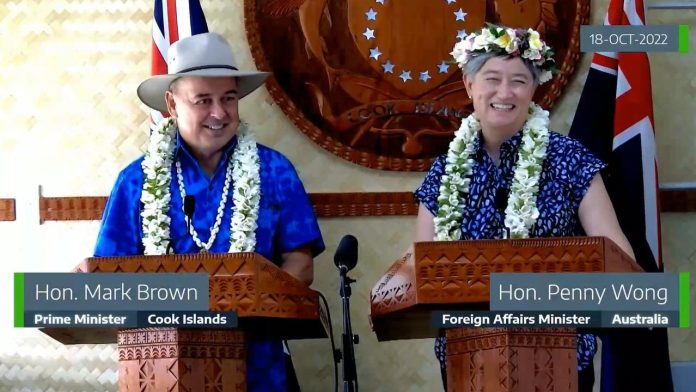 Foreign Affairs Minister Penny Wong has signed the Oa Tumanava partnership deal with the Pacific nation as a pledge of Australia’s support towards its neighbour.

“This partnership is a really important step, we have never had this sort of agreement before,” Ms Wong said.

“Oa Tumanava” roughly translates to friendship in times of peace and in times of adversity.

During questioning by a reporter, Brown was asked if any funding had been committed to the Cook Islands during the diplomatic discussions leading to the partnership deal.

He said while no money had been committed, the island nation would like Australia to help the Cook Islands tackle climate change.

“From our perspective we welcome Australia’s renewed engagement in the climate finance space,” Brown said.

“Certainly, as one of the countries that are at the forefront of the impacts of climate change, we will be discussing and engaging more with Australia on how their support for climate initiatives in the region can trickle down to the Cook Islands.”

Wong said the government understood the importance of helping its Pacific neighbours with the challenges of climate change.

“We understand the importance of working with our Pacific family to help with the burden of adaptation and to make economies and countries more resilient.”

Over the weekend, NZ Foreign Minister Nanaia Mahuta announced a $7.5m (US$4.2 million) commitment to upgrade solar farms on the Cook Islands.

Brown also suggested other ways Australia could assist in the development of the island nation, including strengthening connections with educational and sporting institutions.

“Already we have a large diaspora of Cook Islanders who live in Australia and some of them are now Australian citizens, so we can see the importance of having those connections,” he said.

“For a small nation like us (that) is the most effective way of moving things forward.”

Wong said the government was committed to investing in the economic development of the Cook Islands, pointing to regional infrastructure projects like the Penrhyn wharf.

“This country took a very big hit to your economy during Covid given the effect on tourism,” Wong said.

“And you’ve come through it.”

Australia recently posted a high commissioner in the city of Rarotonga, making it the only country to have a diplomatic posting in every Pacific Island Forum nation.

Wong arrived in the Cook Islands on Tuesday as part of a tour of the Pacific Islands to demonstrate the Albanese government’s commitment to the region.

It is her first visit to the Cook Islands as foreign minister after meeting with Brown in Canberra in June.