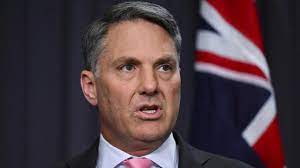 South Pacific defence ministers will meet in Tonga on Tuesday, with Australia seeking a closer military relationship with the three island nations that have defence forces to counter China’s security push in the region.

Australia’s defence minister Richard Marles was due to arrive in Tonga on Monday ahead of the South Pacific Defence Ministers Meeting this week, held annually to discuss regional security challenges.

Papua New Guinea, Fiji and Tonga – the only Pacific Island nations with militaries – are members, as are New Zealand, France, Australia and Chile.

Last week Marles said Australia was negotiating a defence treaty with Papua New Guinea that would see the two nation’s navies and armies work alongside each other more often, and Canberra also wanted to “evolve our relationships” with other Pacific islands.

In a statement on Monday, Marles said the region was facing more threats to shared security.

“The Pacific family is stronger when we respond together, by enhancing coordination, sharing information and improving interoperability between our countries and our defence forces,” he said.

Chinese foreign ministry spokesman Wang Wenbin told reporters at a regular briefing in Beijing: “We hope that the military cooperation of the countries concerned will contribute to the stability of regional peace and will not be directed against third parties.”

The United States and allies including Australia have been alarmed at China’s growing influence in the strategically important region after Beijing struck a security pact with the Solomon Islands in April and sought a wider trade and security pact with 10 nations in May.

Although the Solomon Islands does not have a military, a leaked draft of the agreement showed it would allow Chinese naval vessels to replenish there.

China has been a significant donor of equipment to Fiji and Papua New Guinea’s militaries, while Tonga, with heavy debts to Chinese banks, has received some Chinese military funding.

Marles will also travel to Fiji for defence talks and visit the Blackrock military camp, funded by Australia as a regional disaster relief centre, his statement said.

In January, Tonga was hit by a volcanic eruption and tsunami that saw Australia and New Zealand coordinate a humanitarian response from defence forces that included those of Japan, France and Britain. China also deployed navy vessels to provide humanitarian assistance.

Papua New Guinea said this month it would sign an agreement with the United States to put its military officers on U.S. coast guard and navy ships to patrol for illegal fishing, local media reported.