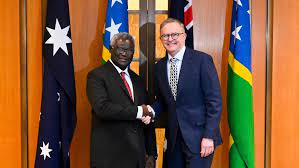 Since Solomon Islands signed a security pact with China earlier this year, the country has garnered unprecedented global attention.

In recent diplomatic engagements, international leaders are sensibly downplaying their geostrategic self-interest to speak of common values. A deep, shared and enduring history was highlighted at both last week’s Canberra meeting and the Declaration on the U.S-Pacific Partnership.

But few have recognised that this shared history is one in which powerful outsiders, including Australia, have exploited Solomon Islands’ land, labour, and resources for their own benefit.

Indeed, when U.S Deputy Secretary of State Wendy Sherman described the Battle of Guadalcanal in 1942 as a collaborative fight to “ensure a free Solomon Islands, a democracy, an independent country,” she omitted the uncomfortable fact that the U.S military quickly handed the territory back to the British colonial administration that forcefully repressed post-War anti-colonial movements.

On her very first day in office, Australian Foreign Minister Penny Wong pledged to “build a stronger Pacific family” and “to listen, because we care.”

In the spirit of contributing to this dialogue, we share insights from a conversation hosted by the University of Melbourne that focused on how Solomon Islanders see Australia.

Reflections on our shared history must start with the fact that Solomon Islanders see (white) Australia as a colonised and a colonising place.

European settlers in Australian colonies were active as traders and planters in Solomon Islands. Many gave pittances for valuable resources, including land.

Queensland and New South Wales sugar plantations were built on the sweat, tears, and lives of indentured Pacific labourers until the racist immigration policies of the Australian Federation forced tens of thousands of labourers back to their countries of origin.

Colonial policies aimed at extracting the wealth from the Solomons – and investing little in the wellbeing of the people – had devastating structural effects, including the deep inequalities that contributed to the civil conflict of 1998 to 2003.

The policies were also intergenerational tragedies.

One author’s family name – Hunhak – remembers an ancestor taken from the island of Malaita to labour in Australia who never returned.

Today, Australia claims to be a friend and family to the Pacific. Australia has been an important aid donor for decades, most evident during the years of the Regional Assistance Mission to Solomon Islands (RAMSI) from 2003 to 2013.

Gratitude for this aid is tempered by scepticism about who it actually helps. Thousands of Australian consultants pass through the country, living in top-quality housing, driving expensive vehicles and earning salaries higher than they would in Australia as an incentive to work in a “difficult” place like Solomon Islands.

Among the unintended side effects of RAMSI was a skyrocketing of real estate prices that made a few property owners rich but made urban life more difficult for ordinary working people.

Australian aid has focused on challenges of governance, infrastructure, policing and policy development. Important though these programs are, the benefits may not be as visible to ordinary people as, for example, the new stadium and hospital wing that have been supported by Chinese aid.

One perceived benefit of increased geostrategic competition is that Australia has become more responsive to Solomon Islands government priorities.

Discussions of shared history must recognise that while the People’s Republic of China is a new partner to the Solomon Islands government, Chinese people have engaged with Solomon Islanders since the 1920s.

Ordinary Islanders arguably engage more with Chinese people who have settled long-term in the country than they do with (mostly white) Australians who stay temporarily.

No Australian policy undermines its claim of being a member of the Pacific family more than immigration policy. An Australian citizen can buy a ticket, arrive in Honiara and get a three-month holiday visa at Customs.

A Solomon Islands citizen cannot so much as transit through Australia without a visa, and the process for getting one is slow, complex and expensive. It’s hard to overstate how much anger this passport inequality generates.

Thousands of Solomon Islanders have earned much-needed income through the Pacific Australia Labour Mobility scheme, but workers have also suffered mistreatment, wage theft and other forms of exploitation.

They feel precarious. When Prime Minister Sogavare blasted Australia’s interference earlier this year, they were worried their contracts would be cancelled.

Pacific Islanders have migrated more permanently to regional Australia for decades, but they are often invisible to policymakers and excluded from the benefits of citizenship. Their working-age children find it difficult to move out of the low-paid, insecure work that drew their parents to Australia.

Solomon Islanders have enormous contributions to make to Australia. Who better than someone who has grown up speaking several Indigenous languages – Solomon Islands Pijin and English – to teach in multicultural schools or lead diversity initiatives? What if Australia’s Pacific diplomacy was led by Pacific Islander Australians?

The current Australian government seems genuinely committed to building respectful relations with Pacific neighbours. It has recognised that climate change is the most important existential threat to the region and the world.

The Foreign Minister has also flagged a desire to incorporate First Nations Perspectives into international diplomacy.

The government must move beyond vague words about shared history to acknowledge the degree to which their country’s wealth was grounded in part on the exploitation of Pacific labour, land and resources – and that outsiders benefitted more than locals from this history.

Even if the flow of aid moves from Australia to Solomon Islands – and not the reverse – Australians still have much to learn from Solomon Islanders about how to establish a just, equitable and sustainable society.

A drop in the ocean? Organised crime dynamics in Pacific Island...