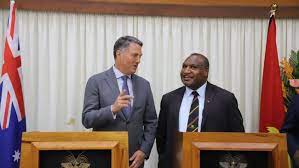 Australian Deputy Prime Minister Richard Marles has refused to admit his visit to Papua New Guinea is about deterring relationships with China amid its growing influence in the Pacific.

China has moved to improve its relationships with several Pacific nations in recent years including a landmark security partnership with the Solomon Islands which caused great concern over the possibility of a People’s Liberation Army base being established less than 2,00km from Australia.

Speaking to Sky News Australia on Thursday, Marles insisted the visit was about celebrating the bilateral partnership and had nothing to do with China.

“I’ve been coming here since I was a kid and that reflects a very close relationship that exists between our two countries which really exists on its own terms,” he said from Port Moresby.

“This in my mind is part of us growing that relationship, seeing it being more mature and being closer together coming up to the 50th anniversary of PNG’s independence.

“Working with friends is really important in the complex and challenging strategic world that we face and China is obviously a part of that but I actually think this is much more about the relationship between our two countries on their own terms.”

The visit is Mr Marles’ first visit since Labor won government in May and is the first since the PNG national elections in July but the Deputy Prime Minister was confident the relationship was as strong as ever.

“I think the relationship between our two countries I think has probably never been in such a good place; there’s an enormous sense of warmth and friendship between Australia and PNG,” he said.

Marles has been holding meetings with PNG Prime Minister James Marape, Deputy Prime Minister John Rosso and a host of other senior government ministers about how Australia can help improve PNG’s national defences.

“Defence is certainly one of the strengths of that relationship, a lot’s been done and it’s very organic,” he said.

“There’s probably not an officer in the PNG Defence Force who wouldn’t have received some training in Australia and equally there are hundreds of Australian service men and women who come through PNG every year.

The Deputy Prime Minister will spend Friday morning with his PNG counterparts walking a section of the Kokoda Trail ahead of the 80 year anniversary since Australian soldiers retook the township on 03 November, 1942.

“There is an enormous history between our two countries and 80 years ago today the Kokoda campaign was underway,” he said.

“Tomorrow morning I’ll be with some counterparts in PNG walking just the first couple of kilometres of the Kokoda track from Owers’ Corner and it does symbolise I think just how close and deep our relationship is here in PNG.

“This is sacred ground for Australia that is a campaign which is as significant to our national history really as any and it will be a very poignant opportunity to share the commemoration of that moment with my PNG counterparts.”

Marles will also attend the official openings of the Lae ANGAU Hospital redevelopment, and the Taurama Barracks Chapel before he returns on Saturday.

Pacific Islands backed a partnership with the U.S, but China unlikely...