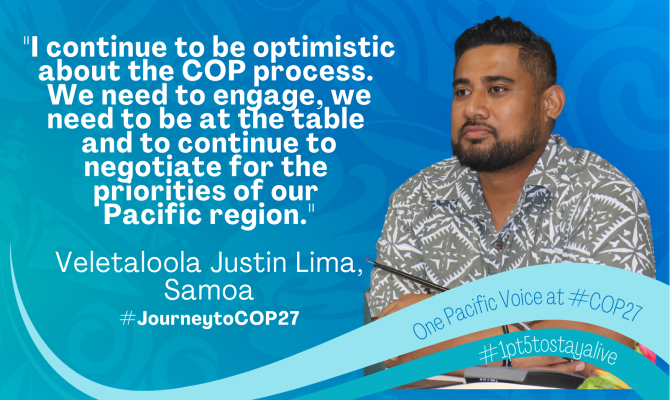 Pacific delegates are counting down to the UNFCCC COP27 in the city of Sharm El-Sheikh, Egypt, keen to negotiate positions on the different thematic areas, to give our Pacific communities the best chance for 1.5 to stay Alive outcome.

Following the Pacific Small Island States (PSIDS) Preparatory Meeting in Apia on 26 – 29 September 2022, the negotiators from 14 Pacific Islands who attended have returned home with a better understanding and a stronger appreciation of the Pacific’s positions on thematic areas at the negotiations.

Funded by the Government of Ireland, the meeting facilitated by SPREP connected the negotiators from national Governments across the Pacific region with the Climate Analytics team, Pacific intergovernmental regional agencies, and partners. The Chair of PSIDS Preparatory Meeting for the UNFCCC COP27, Veletaloola Justin Lima, of Samoa, said the pre-COP gathering was extremely useful.

“There was an abundance of experiences and knowledge shared during our discussions, and as a collective we learn from each other so we can get better. We learn what to do and what not to do and I think this is a very rich group of experts from within PSIDS, and to continue that momentum that we’ve set ourselves to pursue,” he said.

“From our discussions this week, we know the situation going into this COP is quite different, we are already quite behind on a number of issues. The COP presidency, which we were privileged to have heard from, has also already presented the upcoming meeting as an implementation COP.

“I think we have to be very specific in terms of what we are asking and what we want, we can’t go into COP with a shopping list and an array of different things. It’s a matter of prioritising the areas we want to fight for, the areas that are red line issues for us.”

Xavier Matsutaro, National Climate Change Coordinator, Palau’s Office of Climate Change, follows the negotiations on Article 6 of the Paris Agreement. It is one of most complicated threads at the negotiations. The article allows countries to voluntarily cooperate with each other to achieve emission reduction targets set out in their Nationally Determined Contribution (NDC). This means that, under Article 6, a country (or countries) will be able to transfer carbon credits earned from the reduction of GHG emissions to help one or more countries meet climate targets.

“We need to maintain environmental integrity. Whenever you are trading carbon offsets, you want to make sure they are not double counted because the problem is you’re not offsetting anything, you are increasing emissions for greater financial gains,” said Matsutaro.

“There is growing interest from the Pacific in terms of the carbon markets but at the same time the carbon markets is a very complex system. We need to learn and unpack what it means and the implications for us, if you want to participate and make well informed decisions on how best to do it, so we don’t fall into the pitfalls of the environmental integrity side we need to maintain.

“We need to ensure it actually benefits us as a country if we engage in it. For example, the Blue Carbon is one of those things that has been discussed, it’s not necessarily under Article 6 but there seems to be some interest in that regard so we need to understand the rules very clearly so that if and when we do engage in it, we do it in a way that is integral and so that we can actually make use of it in our conservation efforts to build resiliency in our countries.”

Like other Pacific negotiators, Matsurato is well aware that the trajectory is not good, based on science and the evidence he sees in his Pacific nation every day.

“We’re going to pass the 1.5 target if we don’t do anything drastically so we need to apply pressure as much as possible, utilising our climate champions and our heads of states to set the tone at the beginning and during the meeting with the ministers,” he said. “We must always keep in mind the people who are most vulnerable and susceptible to the climate changes which is why we are doing this.”

The COP27 in Egypt, he said, is an opportunity for the Pacific to advance its fight for survival.

“Mitigation is extremely important. And although this is supposed to be an implementation COP, we are not seeing a lot of implementation to the level and scale that is needed. So we have to push even harder this time around to apply pressure so we can get an outcome that looks much better than where we are now,” he said.

The US$100billion Climate Finance promise that’s been made needs to be followed through, the Palau negotiator believes. Loss and Damage, is another issue Pacific delegates will hope to finally get some traction on as well as the fight to preserve the Special Circumstances for the Least Developed Countries (LDCs) and SIDS.

“The ball may fall on our hands to ensure the special circumstances does not curve out to the point where we will get pushed aside. We need to maintain what has been agreed to in the past, preserving it for the future of our survival.”

Speaking of survival,Matsutaro remains optimistic. His optimism is shared by the Chair of the PSIDS Preparatory Meeting for the UNFCCC COP27.

“Our leaders have already identified climate change as the single most existential threat for our Pacific communities and to the region with impacts across all sectors. We are all collectively impacted so it is only fair for us to stand as a collective and have our voices identified at the COP meeting,” said Lima. “I think the level of engagement we as a region bring is vital to the success, or the demise for the lack of a better word. The continued engagement is warranted no matter what the situation may look like, we need to be engaged, we need to be at the table and continue to negotiate for the priorities we have set.”

The meeting in Apia, which is the last time negotiators will see each other before Egypt, is critical to strengthening the Pacific’s collective participation and equip PSIDS negotiators for the long days of work at Sharm El-Sheikh.

So how does a negotiator prepare for COP?

“There is a lot of planning that goes into preparations for COP,” Matsutaro explained. “There is a lot of collaboration, networking with SPREP, the One CROP and partners who can provide the resources and the means to boost our technical capability, and also the funding to get there. We plan as much as we can as a core group and where we see gaps, we collaborate with our various partners to mobilise ourselves the best we can.”

The 27th Conference of the Parties to the UN Framework Convention on Climate Change will be held in Sharm el-Sheikh, Egypt from 06 to 18 November 2022.

The Pacific Small Islands Developing States Preparatory Meeting for the UNFCCC COP27 was funded by the Government of Ireland and facilitated by SPREP from 26 – 29 September 2022.