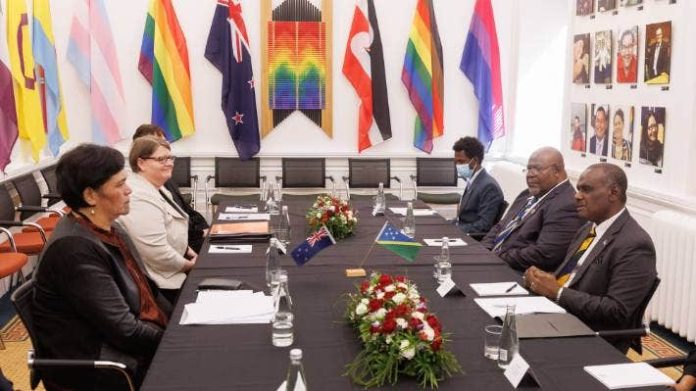 When Solomon Islands foreign minister Jeremiah Manele was hosted at New Zealand Parliament for a bi-lateral meeting, he was ushered into the “rainbow room”.

Same-sex sexual activity is a crime in Manele’s country, though it reportedly goes unpunished.

“That was the only room available for us to be able to use,” Foreign Affairs Minister Nanaia Mahuta said, after their meeting.

Then, in an apparent slip of the tongue, Mahuta said: “There was no specific undertone or messaging, I made that queer – clear – at the beginning of our meeting.”

The bi-lateral meeting between the two, Manele’s first in New Zealand after first being invited before the Covid-19 pandemic, was hosted at Parliament’s select committee room 11, also called the “rainbow room”.

The room has celebrated Parliament’s rainbow community for more than a decade, and was refurbished in 2019 to feature numerous rainbow flags and portraits of Parliament’s current and former LGBTQI+ MPs.

Recent bi-lateral meetings have been held in a conference room in the Beehive, adjacent to Parliament buildings. As Parliament was in a recess week, other select committee rooms appeared available on Tuesday.

Asked about Solomon Islands laws, Manele said his country was a “young democracy”.

“These are emerging issues that we will continue to face and that we’ll continue to see how best we can address within the context not only our culture but also within our constitution.

“These are the big issues. These are challenges that as a young country we will find ways to discuss,” he said.