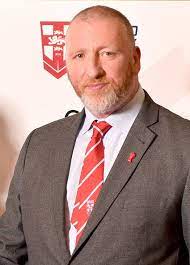 Rugby Football League chief executive Ralph Rimmer has been forced to make a grovelling apology to the Fijian squad after video footage emerged of him mocking them at an awards dinner.

Rimmer is caught on camera discussing the upcoming World Cup in England, when he questions if any Fijian player “has been arrested yet?”

Rimmer made the inappropriate remarks in front colleagues, club executives, players and guests while on stage hosting the RFL’s annual awards night at Headingley on Monday.

When looking forward to the start of the tournament, Rimmer said: “Fiji have already arrived. We don’t think anybody has been arrested yet, do we?

“No, we’re alright, so we’re going pretty well then.”

It is understood Rimmer was attempting to refer to incidents of bad behaviour that have taken place within international squads prior to previous World Cups.

Rimmer has since admitted his comments were ill-judged – and telephoned members of the Fijian management team to apologise.

He said: “I apologise unreservedly for a throwaway remark, which I regretted as soon as I made it.

“There was no intention to malign the Fiji squad – in fact the context of the remark was my excitement that their arrival in the country marked the imminence of the World Cup competition, to which they have contributed so significantly and positively since 1995, on and off the field.”

Rimmer’s crass remarks will call into question his professionalism and also heap huge embarrassment on the RFL before the showpiece World Cup kicks off.

Rimmer announced earlier this month he was to step down as CEO – and will leave the RFL in December.

IMG have taken control of the running of the game and the American media giants have taken a dim view of Rimmer’s remarks.

Rimmer has been forced to defend his record in charge, following accusations he’s failed to grow the game and been ineffective since landing the top job on a full-time basis in 2018….