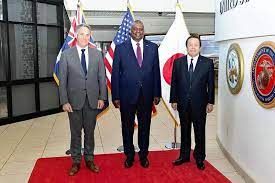 Defence ministers of the United States, Australia and Japan have agreed to boost military cooperation to counter Chinese influence across the Asia-Pacific.

As he welcomed his counterparts to the U.S military headquarters for the Pacific region in Hawaii, Lloyd Austin, the U.S defence secretary, said: “We are deeply concerned by China’s increasingly aggressive and bullying behaviour in the Taiwan Strait, and elsewhere in the region.”

“For decades, our three democracies have worked shoulder to shoulder as an anchor for stability and prosperity in the Indo-Pacific and around the globe.”

Richard Marles, the Australian defence minister, added: “Our interest lies in the upholding of the global rules-based order. But we see that order under pressure in the Indo-Pacific as well, as China is seeking to shape the world around it in a way that we’ve not seen before.”

Last Thursday, Washington announced an US$810 million aid package for Pacific Island nations where the United States plans to intensify its diplomatic presence.

The pledge, which includes a US$2.8 million fund for FBI training with Pacific states, was made during the first U.S-hosted summit of 14 Pacific leaders since the Second World War, when the region was the scene of multiple pivotal battles.

But regional experts have warned it may not be enough to match Chinese investment and influence operations, amid growing anxiety about the authoritarian country’s military and economic advances across the Indo-Pacific.

Peter Kenilorea, a leading opposition politician in the Solomon Islands, said that while the historic summit and increased aid were a welcome sign the U.S is listening to Pacific Islands’ priorities, “it remains to be seen if this increase in attention and support is sufficient to counter the Chinese”.

He added: “It must also be understood that the ground game of the Chinese and their attention to personal influence is vastly different from the U.S approach and that of the Pacific Islands’ other Western traditional partners.”

The government of Manasseh Sogavare, the Solomons’ prime minister, has tilted noticeably towards China in recent years.

A security pact signed between the Solomon Islands and Beijing earlier this year raised alarm bells over predictions that it could pave the way for Chinese troops and naval warships being posted less than 1,200 miles from the Australian coast.

The latest finance proposal includes a previously announced 10-year US$600 million aid request to Congress to build climate resilience and maritime security for the island states.

Ramon Pacheco Pardo, professor of international relations at King’s College London, said: “In my view, the U.S initiative won’t make much difference in and by itself because the amount to be disbursed is very small when compared to Chinese aid and investment.”

Ben Bland, Asia-Pacific director at the London-based Chatham House think tank, called the agreement between the U.S and Pacific nations a positive step in “elevating Washington’s engagement in this key maritime region”.

But he said the U.S would need “staying power” and must listen more to Pacific partners and coordinate with Australia, New Zealand and Japan.

Bland added: “Rather than fixate on how to counter China, the U.S and other like-minded partners should focus on what they can offer that the region wants. Across the Indo-Pacific region, countries don’t want their cooperation with the US and China to be a zero-sum game.”

Kamala Harris, the US vice-president, travelled last week to Japan and South Korea and said the United States would act without fear or hesitation throughout Asia, including the Taiwan Strait.

Beijing considers Taiwan to be part of China and also claims the thin and busy channel of water that separates the two.

Deal with China is another contentious policy by Solomon Islands govt