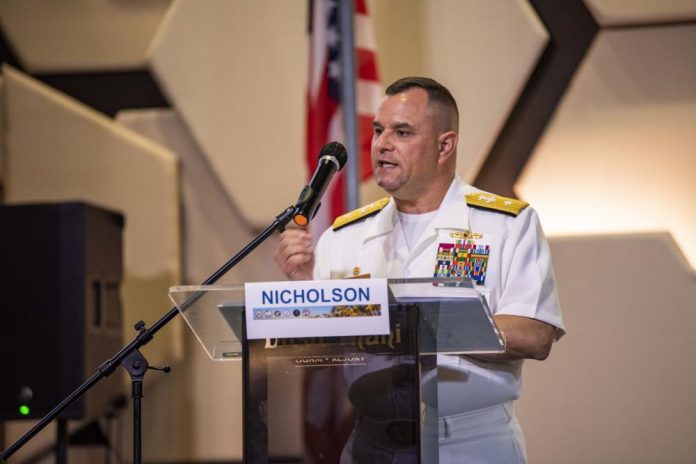 Solomon Islands has appealed to its neighbours to give it a break, repeatedly giving reassurance that its security agreement with China was a harmless deal.

The leaked draft of the agreement sets out a broad framework covering Chinese “police, armed police, military personnel and other law enforcement and armed forces” deployments to the Solomon Islands.

Manasseh Sogavare, the Solomons’ prime minister, insisted he would not allow the creation of a Chinese military base, saying the agreement with Beijing was confined to domestic security.

But it continues to be a nagging concern that causes the United States and Pacific island nations sleepless nights.

Beijing’s clout on the Solomon Islands became clear when it succeeded in luring the island nation away from Taiwan. The security agreement is feared to foreshadow China’s foray into the Pacific island region.

“A security agreement, which we have not seen the details of, with the Solomon Islands is very concerning,” said Rear Admiral Ben Nicholson, commander of the Joint Region Marianas.

“So, what’s the big deal with a security arrangement?”

Nicholson noted that China’s furtive move had a precedent. “We’ve seen how this plays out, just look at Djibouti,” Nicholson said on 20 September, speaking at the Pacific Judicial Council meeting at Dusit Thani Guam.

“An agreement originally publicly stated to allow Chinese vessels to dock there for logistical support turned into full-blown military bases in just a few years, with (China) essentially imposing its will on the smaller nation of Djibouti.”

Given its history, Nicholson said, there is a risk that Beijing would operate in much the same manner and maneuver around laws to exert their influence over Pacific island nations. “The (People’s Republic of China) has a history of slowly contorting an agreement with a smaller country in order to gain advantage for the PRC, as in the case of Djibouti,” Nicholson said. “This concerns me.”

Noting that each Pacific island country is a vote in the UN, Nicholson raised concerns that Beijing “can gain votes” among the islands that would give it an advantage to “influence UN rulings in its favour.”

Nicholson said the threat posed by China is not just through its quickly expanding military capabilities, but through its political and economic influence, as well.

Regional observers speculate that China has already been increasing its pressure on Honiara as gleaned from Sogavare’s earlier refusal to sign the Pacific islands’ declaration of partnership with the United States.

The declaration, which was drafted after several weeks of negotiations between Pacific island nations and officials with the administration of President Joe Biden, covers issues including trade, sustainable development, tackling climate change and regional security. A diplomatic note from Honiara said the government needed more time to review the declaration.

“China is a major economic power, and it is playing to its strengths to gain influence in this region, which poses a threat to our national defense and international stability,” Nicholson said. “This is not a country following international norms or laws.”

The U.S. Department of Defence has tagged China “as the most consequential strategic competitor to the United States and our allies and partners throughout the world,” the JRM commander said.

He recalled China’s unilateral move to begin building the disputed reef and shoals in the South China Sea.

“Even when the international courts ruled against the PRC, for example, the 2016 ruling in favour of the Philippines, the PRC ignored the rulings and kept building,” Nicholson said. “In the process, the feature: a rock, shoal, or reef, which cannot sustain human habitation on its own; is transformed into an island which can sustain human habitation.”

These features that became man-made islands were initially claimed to just be fishing encampments. In 2015, China’s president, Xi Jinping, even told President Obama that China would not militarise the South China Sea.

China’s domestic Chinese law grants sweeping enforcement powers to its own Coast Guard, including the authority to use force to police international waters, which Beijing marks as being under their jurisdiction.

“These domestic laws are inconsistent with, and are in violation of international laws, norms, and standards, and are intended to justify any action China may take to achieve its objectives,” Nicholson said. “This is a common pattern with the PRC: Ignore laws contrary to its liking; push boundaries; make its own domestic laws which impact international norms, push law-enforcement actions; deny international outcry and wait; push military actions.”.