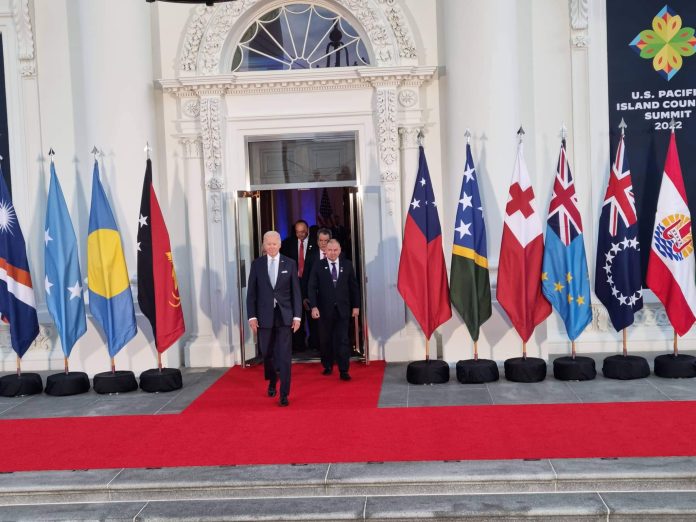 The United States (U.S.) President Joseph Biden has announced U.S recognition of the Cook Islandsas a sovereign state during his Summit with PacificIslands Countries (PIC) Leaders including PrimeMinister Brown.

“I’m proud to announce that, following appropriate consultations, we will recognise the Cook Islands and Niue as sovereign states,” said President Biden.

The announcement has been welcomed by the Ministry of Foreign Affairs and Immigration (MFAI) as a milestone in U.S.-Cook Islands relations, “We have been closely engaged with multiple U.S counterparts on diplomatic relations out of Rarotonga, Wellington and Suva for a number of months now so whilst this announcement on sovereignty recognition was the ultimate objective, today’s announcement is not onl ywelcomed, it heralds a new era in not just U.S.-Cook Islands relations, but the platform from which the Cook Islands conducts its international engagements moving forward,” said MFAI Secretary and Special Envoy to the Pacific Islands Forum Tepaeru Herrmann.

In a statement issued by the U.S. White House, the nine-point Declaration on U.S-Pacific Partnership commits over US$810 million in additional expanded programs to be provided by the U.S. to Pacific Island Countries including the Cook Islands. Of particular interest to the Cook Islands in the Biden-Harris Administration new initiatives to meet Pacific priorities are:

– Supporting the Tuna Treaty – a US$600 million Economic Assistance Agreement associated with the South-Pacific Tuna Treaty which the Cook Islands is Party to;

– Elevated USAID Presence in the Pacific including the opening of a USAID Pacific regional mission
in Suva by September 2023;

– On climate change response, an investment of over US$130million in substantial resourcing, support, partnerships, and leveraging of an additional US$400 million in private financing – for adaptation and resilience building against climate change and extreme weather events; to expand weather and ocean data collection; ocean mapping support; establishment of a resilient Pacific Blue Economy Program and mobilisation of funding towards climate-smart infrastructure;

– More than US$50 million in direct support for Pacific Island economic recovery including promotion of trade and addressing market access barriers for PIC exports to the U.S;

Islands with U.S. private sector solutions that can meet their transportation infrastructure needs;

– US$3million to enhance U.S. Coast Guard training and capacity building in the Pacific Islands for
maritime security and marine protection;

– US$3.5million to support the Digital Connectivity and Cybersecurity Programme;

– US$15million to Executive Education for Rising Pacific Leaders; and

“The Declaration on U.S.-Pacific Partnerships to which the Cook Islands signed onto with the U.S. today was reached following a number of exchanges between officials from the U.S and PICs. It provides the Cook Islands an elevated and solid platform from which to expand cooperation with the U.S in the forward months – bilaterally, regionally and in multilateral fora,” said Secretary Herrmann.

“It avails an expanded menu offering from which the Cook Islands can engage with the U.S to support our development aspirations.” The new initiatives detailed in the U.S-Pacific Partnership avail partnership opportunities for Cook Islands businesses and civil society entities aligned with the Cook Islands national priorities including in areas like renewable energy conversion, climate-smart infrastructure and sustainable oceans development.

“The Pacific Partnership Strategy (PPS) of the United States, also released today, is the United States articulation of its priorities for the U.S.-Pacific Islands Partnership and the approach the U.S intends to take in engaging with the Pacific in the months ahead. While the Cook Islands was not consulted on the PPS, there are elements which we welcome particularly as relate to marine conservation, maritime security, and sovereign rights and creating economic opportunities and forging connectivity but we will need to have a careful look at the PPS in its entirety to see what fits best for the Cook Islands and where we might focus our co-operation with the U.S in the months ahead,” said Secretary Herrmann.

At their meeting in Suva in July, Pacific Islands Forum (PIF) Leaders, including the Cook Islands, articulated the Pacific’s strategy – the “2050 Strategy for the Blue Pacific Continent”. “The task for MFAI officials in the coming months is, working with Pacific and U.S. counterparts, and supported by the PIF Secretariat,to translate the political commitments detailed in the U.S.- Pacific Partnership and it’s US$810million new financial commitment into deliverable modalities that create new business opportunities for Cook Islands businesses and make available new funding, investment and business partnership opportunities

Australia to support development of new naval base in Fiji