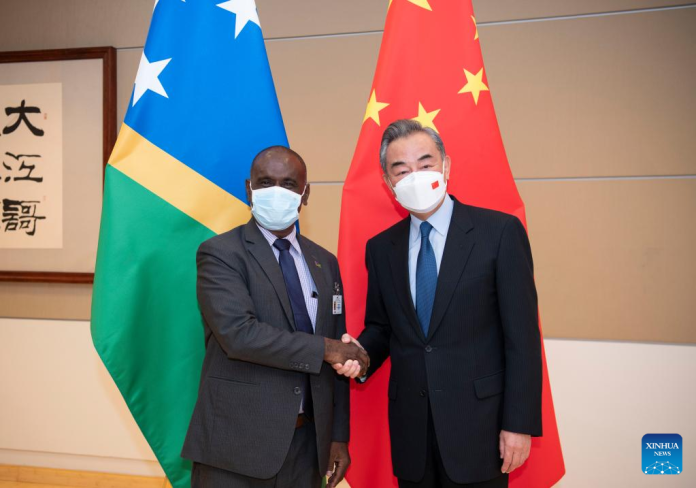 Chinese State Councilor and Foreign Minister Wang Yi hailed the relations between China and Solomon Islands during a meeting on Tuesday with Jeremiah Manele, foreign minister of the Pacific island country.

The meeting was arranged on the sidelines of the ongoing 77th session of the United Nations General Assembly.

Wang told Manele that under the guidance of the heads of state of the two countries, fruitful outcomes have been yielded as a result of the all-round exchanges and cooperation between China and Solomon Islands over the past three years since the two countries established diplomatic relations, which has brought tangible benefits to the people of Solomon Islands.

Political mutual trust between the two countries has been strengthening, and the foundation of bilateral relationship has become more consolidated, Wang said, adding that facts have shown that the decision to establish diplomatic relations between China and Solomon Islands is in full accord with the fundamental interests of Solomon Islands and its people.

China, the state councilor said, appreciates the Solomon Islands government’s effort to lead and unite its people, adhere to independence and self-determination, and firmly stick to its self-chosen path of development.

China has always been Solomon Islands’ trustworthy friend and will continue to support and help Solomon Islands where it can, and accelerate common development to realize the national rejuvenation of their respective countries, Wang said.

The cooperation between China and Solomon Islands is an example of South-South cooperation, Wang said, noting that developing countries also have the right to development, and their people deserve to live happy lives. China has been actively pushing forward the cooperation with Pacific island countries, specifically building six cooperation platforms, which cover storage of emergency supplies, climate change, poverty relief and development, agricultural cooperation, disaster prevention and mitigation, and fungus and grass technology.

Manele wished the forthcoming 20th National Congress of the Communist Party of China a full success, and thanked China, which has become Solomon Islands’ largest development partner, for its support for Solomon Islands as the latter will host the 17th Pacific Games in 2023. He added that such support will help improve the country’s infrastructure and change its national outlook.

Manele reaffirmed Solomon Islands’ commitment to developing relations with China, saying that his country has already signed an agreement with China on jointly pushing forward the Belt and Road Initiative and will actively engage in the China-proposed Global Development Initiative.

Both sides agreed to strengthen bilateral and multilateral cooperation in such areas as agriculture, policing, education and fishing, and promote projects such as the athletes’ village for the Pacific Games as well as Solomon Islands’ national hospital facilities.