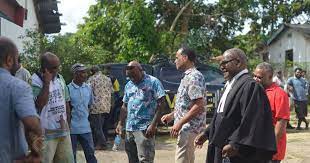 – The Vanuatu Supreme Court has dismissed the urgent constitutional application of the 27 signatories of the no-confidence motion against Prime Minister Bob Loughman.

Chief Justice Vincent Lanabek said that there were two issues that the Court identified which had to be determined by the court.

He said the first issue is that there was a Council of Ministers’ (COM) advice dated 14 August 2022 to the President of Vanuatu, Nikenike Vurobaravu to dissolve the parliament and whether his decision was invalid and unconstitutional.

He said the second issue was that if it was unconstitutional, then what was the effect of that invalidity on the president’s decision.

He said the court was not concerned with the desirability or undesirability of any particular course of action.

It only considered whether the rights and responsibilities enshrined in the constitution have been lawfully and properly exercised plus whether the law as created by parliament has been given effect.

The applicants submitted that the COM was not competent to advise the president to dissolve the parliament and that the advice of the COM was a fundamental conflict of interest contrary to article 66(1) of the constitution, as PM stood to benefit from the dissolution because it stopped the applicants from moving and voting on the motion.

The applicants submitted that as a result of the incompetent decision by the COM, it rendered the decision by the president to dissolve the parliament invalid and unconstitutional.

The respondents submitted that based on the facts, there was no substantive evidence that will support the allegation of conflict of interest on the part of PM Loughman.

The respondents submitted that the proposition of the applicants was flawed because the provision to dissolve the parliament is a collective decision of the COM.

They submitted that once the collective was made, PM Loughman had no control in the act of dissolving parliament which was a discretionary power vested on the president alone.

In this case, there was insufficient evidence to prove a conflict of interest. Most of the evidence was in relation to the conduct of each Member of Parliament or groups of the members of parliament at the relevant time.

The evidence was directed toward negotiations to maintain a majority government which was the case of the applicants as well as the case ofthe members of the parliament on the government side.

They argued that once parliament is dissolved, each and every MPs including the prime minister and his other ministers are in the same position to face the people for the election of a new legislative. The existence of the parliament came to an end on 18 August.

The applicants filed their applications to the Supreme Court on 22 August 2022 after the dissolution of the parliament claiming their rights under article 43(2) of the constitution that belong only to the members of parliament when parliament was still in existence. This is no longer the case.

In this particular case, the court agreed and accepted the submissions of the respondents in the exercise of their rights by the COM under article 28(3) of the constitution to advise the president to dissolve the parliament, which was made in accordance with the constitution. The claim of the applicants that their rights under article 21(2) of the constitution to call an extraordinary session of parliament to debate a motion of no confidence in the prime minister, was infringed, was misconceived because that right has been exercised by 27 MPs in the present case as the facts illustrated this in the present case.

The Public Relations officer of the Government, Fred Vurobaravu said the Government welcomes the decision of the Supreme Court through the Chief Justice to uphold the rights provided by the constitution.

He said the rights of the executive to act for the people and the activities carried out by the president.

“The Government believes that the best option forward is to reset through the snap elections,” he said.

“There is no guarantee of stability if we go in the direction of the motion. This decision today is interpreted by the Government as a win for the national and common interest over personal interests said Vurobaravu.