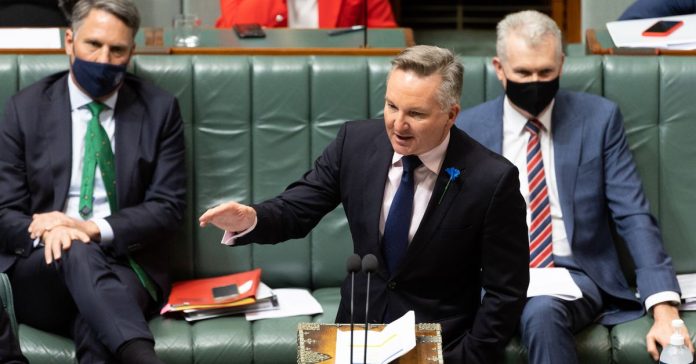 The federal government has trumpeted its successful bid to enshrine its emissions reduction targets in law, telling investors Australia is now “open for business”.

The bill to lock in a 43 percent greenhouse gas reduction target by 2030 and net-zero by 2050 passed the Senate on Thursday with the support of the Greens and crossbenchers.

The legislation was waved through the lower house – where the government holds a majority – hours later.

Despite supporting the legislation, the Greens and key crossbench members had called for more ambitious climate targets.

Climate Change and Energy Minister Chris Bowen said the passage of the bill provided certainty to investors and strengthened transparency and accountability for future governments.

“The message to investors is that Australia is open for business,” Bowen told the parliament after the bill’s passing.

The opposition voted against the legislation, with deputy Liberal leader Sussan Ley branding the bill as tokenistic and unnecessary.

“The 43 percent target has been something of a vanity project by this prime minister,” Ley said.

“It’s something he can take around the world and show that we’re doing things differently when in fact nothing on the ground that reduces our emissions or global emissions has changed one iota.”

Ley says any emissions reduction must be done in a way that ensures reliable, baseload power.

“Unless you can demonstrate a plan that gets the necessary emissions reductions … then you are failing the Australian people,” she said.

He told the Senate that ambitious emission reduction targets in Europe had led to power shortages.

“Unless something changes it’s not too dramatic to say that almost invariably people will die over the European winter unnecessarily, because of these failed, naive, climate change policies.”

A Greens attempt to increase the 2030 target to “at least 75 percent” and impose a ban on new coal and gas projects was shot down.

But Senator Pocock also hit out at the government for branding its 43 percent target as ambitious, after modelling showed state and territory targets would reduce Australia’s emissions by 42 percent.

“If one percent is ambitious, Australians are going to be asking questions,” he said.

But the government also needed to move quickly to turn the safeguard mechanism “from a broken tool into an effective scheme to cut emissions from the nation’s major polluters”.