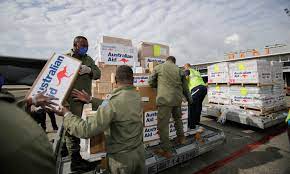 In the debacle of Canberra’s handling of the security agreement with China just signed by Solomon Islands Prime Minister Manasseh Sogavare, one revealing outcome has gone largely unnoticed.

Bad enough that Australia’s intelligence community can’t tell us exactly when it knew about Sogavare’s plans. Or that United States President Joe Biden had to step in and send his top Indo-Pacific adviser, Kurt Campbell, to go and wave a big stick in Honiara.

But for Campbell to announce the U.S would send a hospital ship to boost the country’s lagging COVID-19 vaccinations was a devastating rebuke to Scott Morrison’s government.

After two years of talk about helping the Pacific fight the pandemic – “There has never been a more important time for Australia’s Pacific Step Up as we all face these massive challenges,” Morrison told the G20 in March 2020 – the Solomon Islands still has only 20.5 per cent of its 700,000 people double-dosed. A new wave of infections has taken off.

Papua New Guinea’s vaccination rate is a dire 2.9 per cent among its population of perhaps 9 million (no-one is exactly sure of that, as the last census was in 2011). Vanuatu, to the south of the Solomons, is a lot better with 38.5 percent double-dosed.

These three nations, often patronisingly called Australia’s “backyard”, are our inner circle of neighbours along with Timor-Leste and Indonesia. Further south, New Zealand shares greater strategic interest in Fiji, Tonga and Samoa which all have double-vaccination rates above 70 percent.

It is an extraordinary lapse that these three Melanesian nations, generally regarded as Australia’s area of responsibility by its strategic partners, have been left so unprotected.

Sure, Papua New Guinea has immense logistical and cultural barriers to reach its inland population. But the Solomon Islands and Vanuatu should have been an early focus to achieve a high-level of protection. All but their deepest bush villagers would be accessible to joint medical teams operating from Royal Australian Navy ships.

When the election dust settles, Canberra needs a thorough review of Australia’s involvement in the Pacific.

We are yet to see what results from Sogavare’s deal with China – he promises there will be no Chinese military base. But he and other regional leaders have seen that one sure way to get Australia’s attention is to play the China card. If our response is just shrill alarm and external security measures, we are falling into a trap.

Rather than trying to keep China out – which will not happen – Australia should be demonstrating our commitment to Melanesians, concentrating on human development. A belated step-up on COVID-19 would be one thing. A lot of hard infrastructure can be left to China.

Labor’s promise to review and expand seasonal worker and other Pacific labour schemes is overdue. Senate hearings this year heard of abuse – a dozen islanders crammed into single hostel rooms and charged $150 (US$106) a week each, labour hire firms hitting them with dubious charges. Resources to properly police the schemes are lacking. Indeed, visa threats have been wielded to stop workers complaining. Rather than regulate, Agriculture Minister David Littleproud recently got the Morrison cabinet to agree to a new agricultural visa, to bring in South-East Asians with even less protection.

When it works well, and it mostly does, Pacific seasonal work is two-way grassroots aid. Our growers get hard workers to pick their crops. Islanders send funds home for their children’s education, build cyclone-proof houses, or start small businesses. Littleproud’s scheme would be a drop in the ocean for South-East Asia and lead to persistent exploitation scandals. It is a strategic own-goal.

Morrison has spent big to block China from key telecom infrastructure – $200 million (US$141 million) for the Coral Sea fibre-optic cables linking PNG, Solomons and Australia; $1.9 billion (US$1.3 billion) for Telstra’s takeover of Digicel’s regional mobile networks. Will Telstra be offering better, cheaper services to customers in PNG, Fiji or Vanuatu?

And then what content will be carried? For many villagers, their smartphone is the main or only media of news, opinion, and entertainment. But both Coalition and Labor still look to conventional broadcasting, delivering an Australian-made message.

Labor wants to allocate the ABC an extra $8 million (US$5.6 million) a year to resume the broadcasts drastically curtailed when Radio Australia stopped shortwave services in 2017 (with its frequencies then taken by China) and in 2014 when the Coalition withdrew the $25 million (US$17 million) a year funding for ABC overseas television.

Morrison seems happy subsidising broadcast rights for Australian commercial TV soaps and reality shows like Married at First Sight to show off our culture. He derides Labor’s idea as wanting to export Q+A. He hates the ABC.

Actually, while Pacific audiences do value the ABC’s news and current affairs when they can get it, neither side has yet got the pitch right. Pacific specialists see a great void for co-developed versions of informative and educational programmes. Play School, Gardening Australia, Landline – yes, but with Pacific faces, and in Tok Pisin and Bislama.

And we need to show Melanesians we are with them, and not let strategic advisers overwhelm that. Now that Emmanuel Macron is re-elected, Canberra should back associated-nation status for Kanaky-Nouvelle Calédonie, giving Melanesians their nationhood but under France’s wing. And serious climate-change action would turn Pacific eyes to China as the bigger threat.

INTERVIEW: Connection between human rights and climate change ‘must not be...