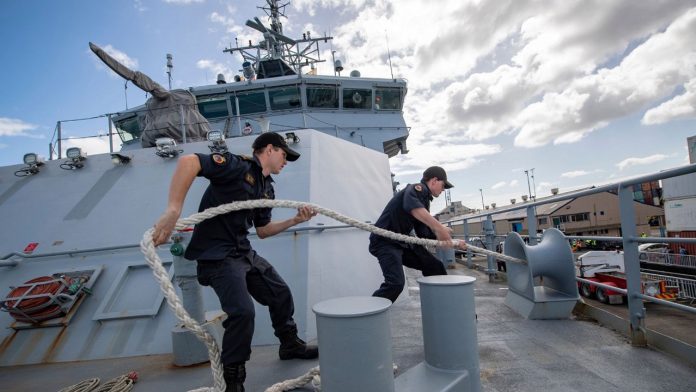 Nearly 60 percent of the world’s tuna stocks is fished in the Pacific and the Pacific Islands Forum Fisheries Agency (FFA) believes approximately 192,000 tons of tuna is associated with illegal, unreported and unregulated fishing there each year.

The operation involved identifying, hailing and boarding vessels of interest on the high seas of the South West Pacific.

In total, 18 surveillance flights and 14 high seas boardings and inspections were undertaken.

Eight potential compliance issues were identified and these were reported to the Western and Central Pacific Fisheries Commission and the flag states of the vessels.

HMNZS Wellington then departed to support the FFA for Operation Island Chief, which involved patrolling the north western Fijian exclusive economic zone and the high seas pocket between Fiji and Vanuatu.

Four Vanuatu and one Fijian fishery officers joined their New Zealand counterparts for this leg of the operation.

“We’ve experienced a high sea state for the majority of our time in the Pacific, which has meant that boardings can’t always be conducted.

“Nevertheless we’ve thoroughly enjoyed working alongside our Australian, French, United States Coast Guard comrades to maintain the standards of the commission, and have appreciated the expertise and passion for protecting fish stocks of our MPI, Fijian and Vanuatu Fishery Officer colleagues.”

MPI Director of Compliance Services Gary Orr said it was great to be able to conduct joint operations again at sea with New Zealand’s Pacific partners after a Covid-19-enforced hiatus.

“Being at sea and being able to board vessels and inspect their gear, systems, and their freezers provides us a greater understanding of compliance with conservation management measures that were put in place by the commission.

“These rules are there to protect threatened species that run the risk of being affected by tuna fishing along with ensuring this important fishery is sustainable as it is a critical resource for the economies of our Pacific Island neighbours.”

HMNZS Wellington has now returned to New Zealand, while HMNZS Manawanui continues its Operation Mahi Tahi activities in the Pacific until October.