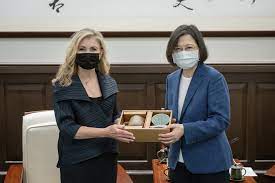 U.S Senator Marsha Blackburn on Monday sounded off about her recent trip to Taiwan.

Blackburn told Fox Business Network’s “Varney & Company” that her trip was about “protecting” the Pacific islands “from the Chinese Communist Party’s aggression.”

She warned China was “intent on being globally dominant by the time we get to the midpoint of the century.”

“What we are doing is working toward protecting the Pacific island nations — Taiwan included — from the Chinese Communist Party’s aggression,” Blackburn advised. “You know, they’re intent on being globally dominant by the time we get to the midpoint of the century. They have been very aggressive in how they have chosen to move forward in the last 18 months. That is of concern to us, but when we look at Taiwan, we have to realize that this is a nation that had declared their independence. They have a founder of the country. They have a constitution, a president, a cabinet, a military.”

She continued, “They value their independence. They share our goals of democracy and freedom, and diplomacy, and they seek to have more ties with the United States and Western nations. And that’s a good thing. We need them as our ally, and they are a strong ally indeed.”

Meanwhile, the Solomon Islands has temporarily suspended all naval visits by the U.S as relations continue to deteriorate between Washington and the Pacific nation.

The U.S government was notified by the Solomons on Monday of a “moratorium on all naval visits, pending updates in protocol procedures,” according to a spokesperson for the U.S Embassy in Canberra, who said that officials will continue to monitor the situation.

Allegations of ‘double standards’ as world reacts to Ukraine crisis