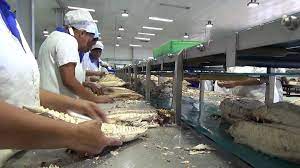 The Pacific Fishing Company suffered a net loss after tax of over $2million (US$1 million) according to its 2018 Annual Report.

While making their submission to the Standing Committee on Economic Affairs, Chief Executive Saiyad Raiyum says the loss was after the cold storage was written off.

“The new cold storage was commissioned in 2018 and the old cold storage was at that pointing time was deemed unfit to run and therefore the balance of the value was written off. That caused the entire numbers at the bottom line to change significantly.”

Raiyum says in 2018 a little over 20,000 metric tonnes of albacore tuna and over 200 thousand cases of tuna cans was processed.

The 2018 PAFCO Annual Report highlights the company compliance level in 2018 stood at an average of 95 percent.

The company produces tuna products to cater to both the local and export demands.

Meanwhile, manpower will be an issue for the Pacific Fishing Company in Levuka in the next few years.

Board Chair Mahmood Khan said this as most workers have opted to move to Viti Levu for work, despite the competitive salary that PAFCO provide.

Khan said they have also noted a decrease in the number of secondary school students as most have moved to the mainland for studies and job opportunities.

“It is very difficult to attract someone who is qualified, married to come and work for us in Levuka because Suva or Viti Levu or one of the major towns has a better attraction to them. Even though we might be paying competitive salary etc, still we are unable to attract the qualified people that we need so i think in future we will find it harder and harder.”

PAFCO has put in place initiatives, including a free daycare programme to help keep workers in the Old Capital.

PAFCO employs over 700 workers and processes tuna for both local and export demands.