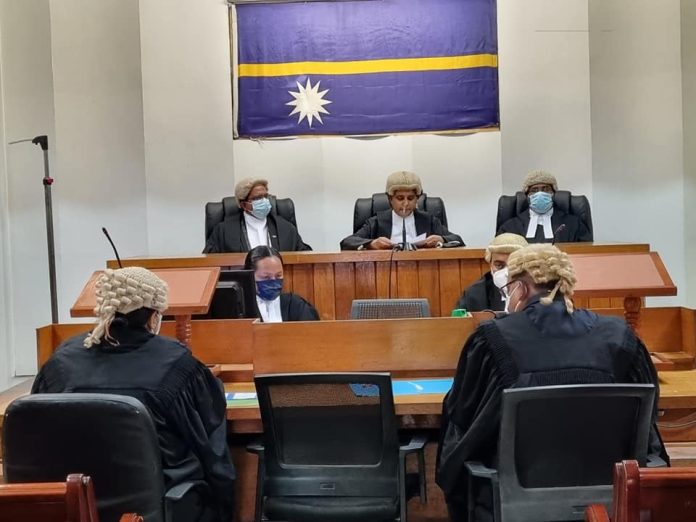 The Nauru Court of Appeal opened Monday and heard its first case in several years, followed by several criminal and civil appeals listed to be heard over the next fortnight with a further session of two weeks allocated to consider refugee appeals.

Acting President of the Court of Appeal Justice Dr Shirani Bandaranayake opened the session, 22 August and is pleased that the court was able to streamline most of the matters pending before the Appeals Court.

“After several years today, the full bench will be sitting for the first time [since 2018] to commence its appellate work and we would be taking for hearing one of the criminal appeals,” Justice Bandaranayake said.

The Nauru Court of Appeal was established in 2018 but has not been able to convene due to COVID-19 travel restrictions.

Justice Bandaranayake acknowledges that executing and closing appeals cases will take time and delays in decisions are sometimes inevitable.

“But in my view, as judges, we must make every endeavour to ensure that judgements are delivered within a reasonable time, neither burying nor denying justice,” Justice Bandaranayake said.

Secretary for Justice Jay Udit highlights the Constitution of Nauru was amended this year to strengthen the Court of Appeal with checks and balances in place to ensure justice is done.

President of the Nauru Law Society Barina Waqa Duburiya addressed issues of concern including that the Court of Appeal remains fully functioning and to ensure the rule of law is implemented without delay or interference; critical vacancies to be filled urgently, such as the role of the chief justice and resident magistrate; prioritisation of training and mentoring of legal staff; and to urgently address laws such as land reforms to conform with the current times.

Meanwhile, Justices Rangajeeva Wimalasena and Colin Kenway Makail swore their oath of office as justices of the Nauru Court of Appeal Monday.

President Lionel Aingimea presided over the ceremony and witnessed by Minister for Justice and Border Control Maverick Eoe, Acting President of the Nauru Court of Appeal Dr Shirani, Secretary for Justice Jay Udit, and others.

President Aingimea congratulates the justices and looks “forward to the judgements coming out from the Court of Appeal.”

“You being the final bastions of the rule of law, that will uphold the rule of law, [and] enshrine what we hold dear the Constitution and of course the values that make us equal,” President Aingimea said.

Justices Wimalasena and Makail swear to be faithful and bear true allegiance to Nauru and will obey, observe, uphold and maintain the Constitution and defend the rule of law, the rights of the people and to do justice to all persons without fear, favour or prejudice.