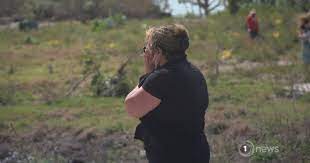 On one hand, they are desperate to reconnect with their land but on the other, they know all they will find is destruction from January’s tsunami.

Kristen, who lives in New Zealand, looks stony-faced at the damage to the resort that employed many on the island – she’s seen pictures before, and she knows the deal.

“It’s sad [it] doesn’t look the same, still feels like home,” she says, stoic. Suliana points to a slab covered in collapsed walls and says “it’s the kitchen I used to work there”.

But about a hundred metres on we come out of the trees and both women stand silently. Kristen weeps as she sees a concrete pad, all that’s left of her late parents’ house, the house she grew up in.

Suliana also wipes away tears as she stands on the foundation of her destroyed home. She worked for six years in Hastings at an apple farm, saving frantically, to build it. She says it feels like the years working counted for nothing.

“It really hurt,” she says, her voice breaking.

Getting to Atata isn’t easy. The population of more than a hundred people have all been evacuated and to go there you have to get a permit from the Government’s National Emergency Management office and be accompanied by a police officer.

The people who once lived on Atata now stay in a church hall in Tongatapu or with extended family members. But disconnected and separated from their land they feel lost.

We’re told five people have died since the January disaster – they all yearned to go back to the island where their hearts lie. They find it tough going too. On the island, they went fishing for food or worked at the resort. But in the capital Nuku’alofa, everything costs money.

Suliana says everyone is finding it tough.

“Compared to [the] island we don’t pay anything there for our food or bills like electricity or water. but when we moved down here it’s really tough for us to change for here everything is money, we need money to buy food like cassava, taro,” she says.

There’s a plan in place for the people of Atata.

The son of King Tupou VI, Prince ‘Aata, has given the people land on his estate in Masilamea and the Government is building houses, a church and school there. They’re small houses for the big families but after three weeks of moving in, they will have the option of extending.

The first grave is already there too – this is where Siliana and Kristen’s mother who died a few weeks ago is buried. The family exhumed their father’s remains in Atata and have reburied them here too so the parents can be together tended by their family.

The relocation is a hard ask for a population that has been there for generations.

Kristen, who lives in New Zealand, is already talking about rebuilding on Atata.

“It’s home, it’s always home for me, that’s what I just said to my sister, the foundation is there, nothing is going to stop me from coming here”.

When we leave their island, the sisters are quiet, thoughtful.

But somehow they look less burdened as our boat motors away.