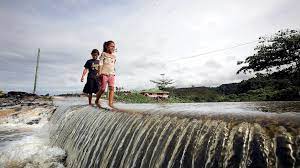 In April 2020, Tropical Cyclone Harold hit the Pacific, unleashing torrential rains and floods which severely affected infrastructure, vital services, and livelihoods just as the region was starting to deal with the global outbreak of the coronavirus disease (COVID-19) pandemic.

This, sadly, is the state of play for the Pacific, one of the most vulnerable regions in the world to the impacts of climate change. While climate change is a global issue that concerns everybody, rising temperatures and sea levels and the increasing frequency and severity of natural hazards represent an existential risk for the Pacific, home to remote small island developing states and atoll countries.

While the work of mitigation—reducing emissions and other factors that contribute to man-made climate change—remains critical, increasingly that is being paired with work on adaptation, which aims to build resilience to the climate we face today and may have to face in the future.

In advance of COP26 last year, the Asian Development Bank (ADB) announced it was raising its ambition for climate finance from its own resources for 2019-2030 from US$80 billion to US$100 billion. Of that, ADB announced US$34 billion would be for adaptation, signaling a new emphasis to strengthening resilience in the region.

But in the Pacific, which is not a leading contributor to global greenhouse gas emissions, that emphasis was happening already.

Climate Change Adaptation in the Pacific

More broadly, since 2016 ADB’s climate change adaptation financing in the Pacific has totaled almost US$280 million, or 61% of ADB’s total climate change financing of about US$454 million in that timeframe.

This strengthened focus on adaptation has already had an effect for countries like Tonga, one of the most disaster-prone countries in the world ranking 2nd out of 181 countries on the World Disaster Risk Index.

In 2020, ADB and the Government of Tonga commissioned a Multi Hazard Climate and Disaster Risk Assessment that analyzed thousands of buildings, roads, power, and water assets on the country’s largest island of Tongatapu.

A risk index was developed from the assessment, which showed areas in Tongatapu at high risk to the impacts of climate change and therefore prone to frequent or permanent flooding. The report also showed relatively safe areas that could become home to more resilient communities.

That focus on adaptation helped the country when it was struck by a devastating tsunami in January this year. While the tsunami claimed three lives and severed communications with Tonga’s islands, the ongoing, groundbreaking disaster risk management and adaptation work conducted by Tonga and ADB helped reduce the impact of the disaster and accelerate the recovery.

Those partnerships include the support of Pacific neighbouring countries Australia and New Zealand, whose contributions to ongoing climate adaptation projects total US$37.5 million in grants, including US$12.6 million for the Vanuatu Interisland Shipping Support Project (New Zealand), US$6.4 million for the Nuku’alofa Urban Development Sector Project in Tonga (Australia), and US$2 million for the South Tarawa Renewable Energy Project in Kiribati (New Zealand).

ADB is also partnering with Ireland through the Ireland Trust Fund for Building Climate Change and Disaster Resilience in Small Island Developing States, which has committed US$13.5 million to help the Pacific’s 14 small island developing states deal with climate change and disaster resilience challenges.

ADB works with the Global Environment Facility (GEF), a multilateral trust fund that finances developing countries to implement their commitments under major international environmental conventions. The GEF has backed the development of sustainable, climate-resilient urban water supply and sanitation systems in the Pacific, as well as climate-resilient road reconstruction in Vanuatu following the devastation of Cyclone Pam in 2015.

ADB has also partnered on climate change adaptation with the Green Climate Fund (GCF), the main operating entity under the financial mechanism of the United Nations Framework Convention on Climate Change (UNFCCC). Since 2015, the GCF has provided US$31 million for water and wastewater management in Fiji, US$29 million for water supply resilience in Kiribati, and US$27 million for climate resilient connectivity in Nauru.

Together with the support of national governments in the Pacific themselves, these combined efforts toward climate change adaptation will remain a key priority for the region to be more and more resilient, both now and into the future.